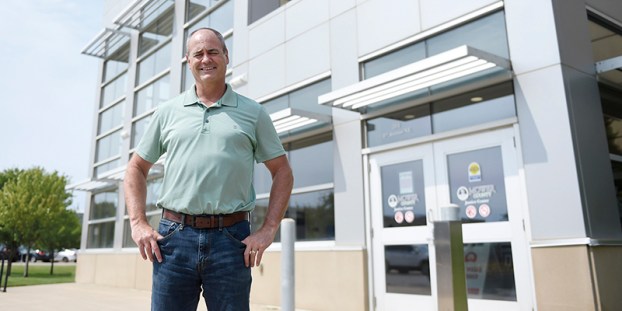 Austin Mayor Steve King remembered how a world was changing after watching the events of 9/11 unfold. Photos by Eric Johnson/photodesk@austindailyherald.com

Austin Mayor Steve King was working with the Department of Corrections in Lakeville when the Sept. 11 attacks occurred. He was first alerted to what was happening when a phone call woke him up after a late night.

“My friend Keith was on the other end of the phone and said, ‘Turn on the TV!’” he recalled. “As I reached for the remote and asked why, he frantically reported that a plane just hit the World Trade Center. Not long after I turned on the TV and heard the reporter wonder if this was an accident or if the plane had malfunctioned, I saw the second plane come into view and slam into the other tower. This just became real and the world seemed to stop and pivot to the harsh reality that evil exists at a level I never before imagined.”

“My immediate thought centered on my astonishment at how people could hate so badly and destroy so many lives so freely,” he continued. “After my initial thought quickly came my second thought: Why are we going to bring a child into this world? My wife Shelley was four months pregnant with our son Carter.”

As the day’s events unfolded, King remembered the fear and concern as two more planes crashed – one into the Pentagon and the other in a field in Shanksville, Pennsylvania. The effects were felt long after.

“In the days, weeks and even months to follow, this horrific event consumed every conversation, TV channel and radio station,” King said. “Scheduled events and activities were cancelled for a period of time that I recall to be many weeks.

“The world had changed, and I and everyone knew it.”

Bonnie Rietz was mayor of Austin during the attacks on 9/11. Michael Stoll@mike.stoll@austindailyherald.com

On Sept. 11, Rietz was at City Hall preparing to sign an Alzheimer’s proclamation. By the end of the day, all of the plans for the coming week were cancelled.

“I was in my office at my computer and Tom Dankert came in and said, ‘Bonnie, a plane crashed into the Twin Towers,’” she recalled. “He went out, then came running back in shortly after and said, ‘Bonnie, you have to come.’ We went into the city council meeting room and he turned on the TV and showed me the second tower being hit. It was like the world stopped.”

Understanding that people would need to find comfort from the traumatic nature of what she was seeing, Rietz immediately reached out to First United Methodist Church.

“The pastor at First United Methodist Church was someone I had been working with at the time,” she said. “I called her right away and asked if there was anything that we should be doing as a community because this was so tragic and people were going to need to process it. She said let’s have a prayer service at noon at First United Methodist. I called my contacts at the TV, radio and newspaper and said we were having the prayer service. As the day went on, we realized that more would be needed. We set up a prayer service at 6 p.m. at St. Olaf, so we had two things that very first day.”

As mayor, Rietz had to consider how the attacks were going to affect the people of Austin and what City Hall could do to help.

“On the 12th, on my way to City Hall, I stopped at the Salvation Army and the Red Cross to see how things were going and were we getting supplies out there,” she said. “Right away, they had already been contacting people, sending supplies, and getting teams ready to go out to help. I was then at City Hall fielding calls from the media and the citizens wondering what they could do.”

But what stood out significantly to Rietz during that time was the role local churches played in the healing process.

“For many people, that was the time to turn to their faith and the church,” she said. “That was something that we as a community could do; that power of prayer was certainly something people wanted during that time. The days after that were much quieter than I expected. I did a radio show, we did another prayer service at noon on Friday, and on Sunday the 16th when I was supposed to be meeting Tom Brokaw, I read a prayer at all three services at my church (St, Olaf’s Lutheran Church). People were frightened or upset. Even if you didn’t know anybody, you certainly felt for the families. There were people who knew people who died or had family members who died, so there was a lot of grieving during that time.”

Jeanne Poppe, a member of the Austin City Council and counselor at Riverland Community College during the attack. Eric Johnson/photodesk@austindailyherald.com

On Sept. 11, 2011, Jeanne Poppe was serving on the Austin City Council and working as a counselor at Riverland Community College. At the time, counselors from the Austin and Albert Lea Riverland campuses would meet at Perkins in Austin on a weekly basis. It was during one of those meetings when she first learned that something was happening.

“We were at one of these meetings and I remember checking out and Larry Eisenberg asked if I heard about what was happening in New York,” Poppe recalled. “At that time, one plane had hit and it was stunning for all of us; we didn’t know anything about it.”

Upon returning to campus, Poppe and other staff set up a television in the common area and watched in horror as the second plane struck the World Trade Center South Tower.

“It was stunning, confusing, scary, and just really alarming for all of us,” she said. “A number of students started to gather and watch, not knowing what was going to happen or what was happening. It was a very frightening time.”

“It was before cell phones were big and it’s not like people were on Twitter or Facebook,” she continued. “We weren’t constantly checking things; all we had was the television and radio and news reports.”

In the days that followed the attack, Poppe saw an uptick in students coming to her officer to talk.

“Because it was so unsettling, people were so stunned initially,” she said. “It was something that was happening halfway across the country, so it’s not like it was in our backyard. But as other things happened, as airports shut down, people were definitely thinking less about what was going on in the classrooms and about what was going on in the world and how we are impacted. For a short period of time, students were more on edge, as were faculty and staff, and the question was what do we do next; how do we remain in our routine and feel that is a comfortable place to be?”

Although the attacks occurred in 2001, the effects were felt for years to come. Poppe said that during her time in the State Legislature, the concern over terrorism was a factor at several points.

“At a state level we’re not dealing with federal aviation, but there were certainly concerns about who was out there and what they were doing,” she said. “I’m sure there were instances when a bill would come up, for good or bad, that was somewhat connected to what happened and the fallout from that. Diversity is challenging by itself, having different people around us and speaking different languages, but I think for some people, there was a sense of no one is trustworthy anymore, maybe prompting doing more blanket things that would impact a larger group. I’m sure certain legislators had more of a direct connection, but I think we as a body have over the course of the last 16 years become much more diverse. There are more people of color and I think for them, they were perhaps inspired more. Maybe they had some reaction that got them more engaged in what was going on in the world and their local communities.”