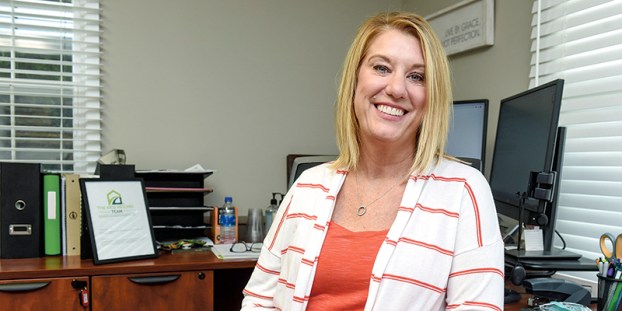 Kris Heichel, branch manager of the Fairway Mortgage branch in Austin, has seen a good amount of success since joining the mortgage company in 2016. But that success is only the tip of the iceberg of what her team has been able to accomplish. Eric Johnson/eric.johnson@austindailyherald.com

Kris Heichel recognizes her early life in the mortgage world was not easy, but in some ways it defined the success she and the Fairway Mortgage branch she owns in Austin is today.

In just over four short years, Heichel and Fairway has become one of the heavy hitters in the mortgage world, winning numerous awards on the national scene from Scotsman Guide trade magazine last year, including being listed in Top Number of Loans (355), Top Woman Producer and Top Volume (just over $55 million in the 355 loans).

“I just don’t stop,” Heichel said from her office. “I acknowledge it, it’s super amazing, and then it’s ‘okay, what the next thing we have.’”

The word “we” is the key, however, along with the world ‘team.’ Both of those concepts have deep meaning for Heichel and Fairway in general.

“It’s 100% not me,” Heichel said when talking about the team. “This is all you guys. They stay until the job is done.”

However, Heichel’s journey  to the success she enjoys today, which includes an office in Rochester and another team in Fairmont, has been a long one that started in June of 2004 and which wasn’t always filled with successes.

“I actually had two jobs,” Heichel remembered. “I was working for the school district with the summers off and I also worked for the Austin Board of Realtors as a liaison. I did that for two years and it was a very part-time gig.”

However, it was the position of liaison that triggered her to fully jump into the world of real estate. She was encouraged by a classmate’s brother-in-law, who owned his own mortgage, to give it a shot.

With the incentive of 100% commission, Heichel thought she would give it a go.

This position was made worse but the crash of the housing market in 2008.

“It was a tough year,” she said. “I was a single mom making peanuts, but I couldn’t imagine not doing the mortgage thing. It became a total part of me. I stuck with it and we ate a lot of Ramen noodles.”

However, as the company she was working for shifted, Heichel found her ideals didn’t align as much and so she made the switch, starting with Fairway in 2016.

Fairway is a national company with individually-owned branches with very different personalities.

“Every branch is run very differently,” she said.

Heichel said that Fairway offered the flexibility to run her branch as needed, understanding that what works in one place may not work in another.

At the same time, Heichel brought people with her that would form the core of her own branch and make it thrive.

“I now have the strongest team I’ve ever had,” Heichel beamed. “Fiercely loyal, hungry and smart. Those are the people I look for.”

The awards are evidence of that. This past winter, Fairway was named Small Business of the Year by the Austin Area Chamber of Commerce.

The move to Fairway has allowed Heichel and her team the ability to streamline services. The only thing corporate about here is the corporate underwriter. All other parts of the mortgage trade are under one roof.

“It’s a rare thing to have a closer, funder and processor all at your fingertips in the same branch,” Heichel said. “If you need something in a rush, you don’t have to wait in line. It makes things so much more efficient.”

The other part of Heichel’s success is the support coming from Fairway the company, providing resources necessary to strengthen business models of each branch.

A result of Heichel and her team’s hard work isn’t just limited to financial success or winning awards. It’s evident in what she’s been able to do for the community, believing that the success of a business should be represented in supporting the community.

“A lot of it is you feel that confidence and you want to give back,” Heichel said. “Doing things with the chamber, donations to golf tournaments and donations to public schools. Giving back and telling my story.”

Fairway will keep pushing into the future and to do that successfully, Heichel believes that whatever that success is, it will come with honesty.

“Honesty. As a young loan officer, I didn’t realize how important it was,” Heichel said. “If something goes wrong, you have to be honest. We are human, we do make mistakes. Every file has a problem and it’s your problem to find it before the underwriter does.”