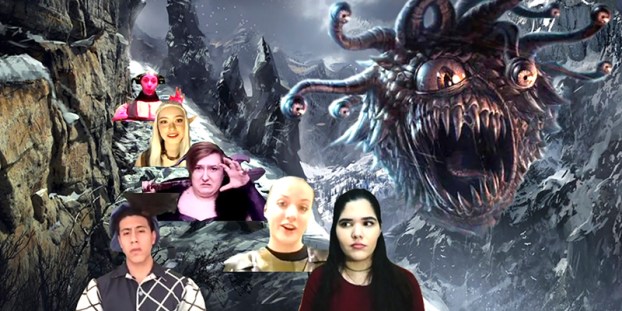 “Riverland’s production of ‘She Kills Monsters: Virtual Realms’ utilized both Zoom and Open Broadcast Software platforms to create a live streaming video performance,” the KCACTF announced in an email. “Actors logged into Zoom each night from their homes, performing on camera in front of a green screen. Technical Director John Deyo utilized the video streaming technology to drop the actors’ videos into a virtual fantasy environment, allowing for a live performance that incorporated special video effects, backgrounds, filters, and animations.”

Each year, the KCACTF, a national organization in partnership with the Kennedy Center, invites college productions from a handful of colleges and universities within eight regions of the country to participate in the organization’s regional college theatre festivals.

Riverland is in Region 5, which consists of colleges and universities from Minnesota, Iowa, Missouri, Kansas, Nebraska, North Dakota and South Dakota.

“Our show was selected to be an invited production and participate in our region’s festival back in January,” said Lindsey Duoos Williams, who directed “She Kills Monsters: Virtual Realms” this past fall. “It was one of a dozen productions chosen from throughout the region. From there, the national committee selects some of the best works that they saw in all of the different regions for either participation in the national festival in April or other national awards. Everything is virtual right now, so there was no in-person national festival, unfortunately. But, they just announced their national awards for the productions that they saw and we were really honored to be included in that list and get recognition for the technology.”

The award is the first of its kind for Riverland Theatre, who has been participating in the KCACTF for seven years.

“It’s difficult because in a normal year, to have your production invited to a festival and be eligible, you actually have to bring the physical production to the regional festival,” Williams said. “It’s quite a lot of work to pack up the sets and costumes, and all of the actors have to come back and perform the whole show at the festival. This year, with it being virtual, it was a really good opportunity for us to submit our piece because we didn’t have to reassemble our actors. It was all on video. We were really honored to have been chosen as one of the top productions in the region to be shown at the regional festival.”

Williams credits Deyo and the actors with making the show possible.

“We didn’t know how we were going to pull this off and we had to figure it out as we went,” she said. “It was very uncertain at times, but we’re really fortunate we have a technical director with a video background. John wasn’t afraid of the new technology; he was able to figure it out and come up with some creative new ways of using it. For our cast and students, this was new to them too. They had never performed something like this before, so they were having to learn how to do everything. Because they were performing from home, they had to be responsible for their own technology; they were setting up their own lights and cameras and green screens. If something went wrong, we weren’t there onsite to fix it. I think this is just such a wonderful testament to the work our entire cast and crew did to do something brand new that we had never done before.

“That felt like an accomplishment, and to be recognized in this way is really meaningful.”