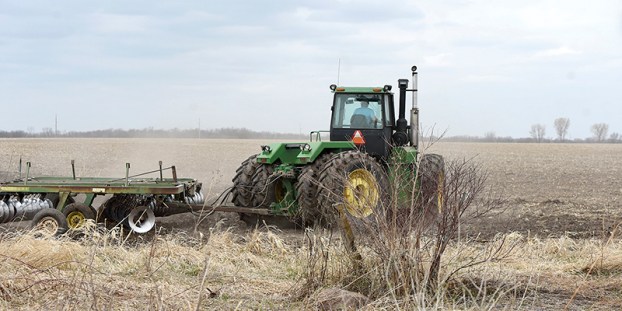 Famers are taking advantage of the mild weather to get a jump on getting in the fields this spring. Eric Johnson/photodesk@austindailyherald.com

With warm weather ushering in an early spring, local crop farmers have a chance to get an early start to the planting season.

“A lot of field work is being done,” said Marlin Fay, president of the Mower County Farm Bureau Federation. “It’s one of the earliest springs I remember in my farming career, and I’ve been farming for 45 years. It’s kind of exciting to have an early spring.”

Fay explained that the extra time helps alleviate the pressure farmers face at the beginning of a new planting season, the timing of which can vary from year to year.

“The first thing is you’re not so rushed,” he said. “That’s a big advantage because it gives you more time to do stuff. Sometimes if you get late springs, you start skipping things. A lot of people are putting on anhydrous (ammonia) for corn crop, doing tillage and getting their fields leveled off and grounds working really good. You just have more time to do stuff and that’s a big advantage.”

“When the weather gets so nice like this, you might be in a hurry to get stuff in,” he continued. “I’ve been farming long enough to know that sometimes you get a crop in early and the weather changes later on, which can mean more problems later on. But that’s Mother Nature and you can’t control that.”

Some crops, such as small grains, can benefit from an early spring.

“Oats and wheat germinate at lower temperatures than corn,” Fay said. “If you get that stuff in early and beat the heat in the summertime, the crops ripen a bit earlier. It’s definitely an advantage for most things to get in early. For corn and beans, it’s a little bit the same way; the earlier you get in, the better off your crop is going to be in the long run.”

“I imagine you’ll see corn planters running next week if the weather stays nice,” he continued. “Insurance day is April 11 for corn. That’s when you can plant corn in Minnesota and have your insurance be good. By that date, if the weather stays as nice as it’s been, people will be growing.”

While many hog farmers found themselves unable to sell their hogs last year as the COVID-19 pandemic shut down some food production plants, Fay said that crop farmers were not affected as much.

“Some people got (COVID-19), but for the most part, the advantage is we’re out in the open and we don’t have a lot of contact with people,” he said. “The co-ops we deal with have taken steps to make sure we stay socially distant from each other. When we’re out doing the work, we have very little face-to-face contact and if we do, we’re out in wide open spaces and are a few feet apart. From that aspect, it’s been really good for agriculture that we’ve got a little bit of an advantage being out in open spaces.”

While an early spring is ideal for crop farmers, Fay acknowledges that, as always, farming is still unpredictable.

“Anything can happen from this point on,” he said. “Mother Nature is going to do what it wants, but hopefully we’ll continue to have nice stretches of weather through spring. I’ve seen springs when it started out like this and then it rained for three weeks and we didn’t turn a wheel. We will need timely rains; we’re not overly dry, but we’ll need moisture through the summer to keep us going, so hopefully we’ll get those.”