‘What we do is essential to life’

Al Batt: Hard not to comment on the weather ­— but it’s cold

Echoes from the Loafers’ Club Meeting

I had a chance to win $500 on a radio show. They asked me how many strings a clarinet has. I guessed five.

I know. I should have said four.

I have a wonderful neighbor named Bruce. Whenever I pass his drive, thoughts occur to me. As I was thinking warm thoughts such as cold weather makes soup taste better, I recalled a few Februaries back when I was leading a birding tour in northern Minnesota. My bus was stuffed full with nice folks from Georgia, Tennessee, Florida and Alabama. We boarded the bus when the temperature was -33°. By the time we’d reached our first stop, it had warmed up. I announced to the passengers that the temperature was up to -30°. There was no applause.

Around the middle of February, the interiors of vehicles warm when parked in the sun. This happens because of the sun’s position in the sky. The sun heats dark surfaces like asphalt and rooftops enough that snow and ice melt when it seems as if they shouldn’t.

A friend stopped to say hello as I frisked the mailbox. It was great to see him and we visited for a good spell. Neither of us asked the other, “Cold enough for you?” It’s hard not to say that. We’ve been living hereabouts long enough to know that the weather doesn’t require our approval. I stood outside in temperatures well below zero during our conversation but felt no discomfort. I was toasty not because I was properly dressed. It was because the sun and friendship were shining. I try to enjoy all weather and feel no obligation to defend it when it misbehaves.

I’m not tying a tie while riding a bicycle

I was making an appearance in the pulpit. There wouldn’t be many in the church as it was a virtual service, but I would be. I decided to wear a necktie. It’d been a year since I’d worn one. I tied it like greased lightning. I reckon tying a tie is like riding a bicycle, except for all that pedaling.

Thanks to wearing a mask, ventriloquism has never been easier.

The only salt substitute we had when I was growing up was pepper.

There are few unforgettable experiences.

Saint Menard’s Hardware Store offers a tool designed to scrape off “My child is an honor student” bumper stickers.

After a tough loss, man throws a ball into the crowd. This ended the bowling tournament on a sour note.

Man loses two pounds after cleaning the sweatpants and sweatshirt lint from his belly button.

Inspired by The Old Farmer’s Almanac saying winter’s back breaks around the middle of February, I trudged outside into the land of Mark Trail. Mark Trail is a newspaper comic strip created by Ed Dodd in 1946, which centers on environmental and ecological themes. The sun was shining, giving each tree a single follower, its shadow. I love what is near and treasure the familiar. I don’t wonder where my sense of wonder went. I carry it with me. The jays cried “Here, here, here” and nuthatches traveled briskly up and down tree trunks. I found enchantment in a pair of cardinals. Their name comes from the red plumage resembling the robes of the cardinals of the Roman Catholic Church. The word comes from the Latin cardinalis, meaning serving as a hinge. Things with cardinal qualities are principal, chief or important.

A reader reported a barred owl perched on a shepherd’s hook in the yard and wondered why it was there. Barred owls eat small animals, including a winter menu of squirrels, mice, voles, rabbits and birds. They hunt by perching on an elevated perch and using their sharp senses to scan for prey. They’ll perch near water and catch fish. Barred owls swallow small prey whole and large prey in pieces, typically eating the head first and then the body. They occasionally store prey temporarily in a nest, on a branch or on a snag to eat later.

An old Toyota Tercel drove past. A tiercel or tercel is a male raptor used in falconry. He’s about a third smaller than the female. It caused me to think of other old cars carrying bird names. Ford Thunderbird, Ford Falcon, AMC Eagle, Buick Skylark, Pontiac Firebird and Plymouth Roadrunner. 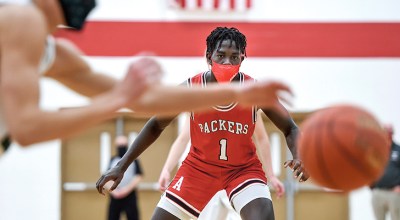