From COVID to QAnon, church makes disinformation training a… 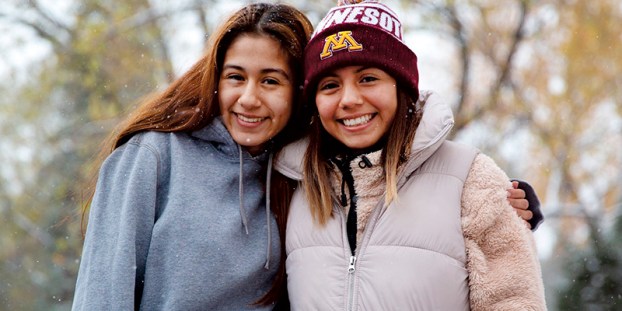 Ingri Ramirez was so focused on registering voters during a recent door-knocking effort in Minneapolis that she missed a “beware of dog” sign.

“This big dog comes out, and then wants to bite me and stuff,” Ramirez recalled as she walked up to one house. “So then I jump over the fence, and then the owner comes out and is like, ‘Oh I’m so sorry.’”

Turns out the homeowner was also already a voter, but that’s OK. Registering eligible voters and ensuring people who can vote are registered are both key goals for Ramirez and other young advocates this political season.

It’s especially important within Minnesota’s Latino communities, which since 1990 have grown from about 50,000 to more than 300,000 people, with roughly 127,000 eligible to vote. Many are second-generation citizens in their 20s or who are just coming into voting age and will vote for a president for the first time on Nov. 3.

Ramirez, 19, is part of what some organizers call “la vanguardia,” young Latinx people who are highly active in engaging their communities around voting and other issues. The presidential election has sharpened their focus and their desire to get their voices heard.

Advocates say Donald Trump’s election as president in 2016 was a catalyst for many Latinx people to become politically active in Minnesota and across the country.

Trump’s anti-immigrant rhetoric, his disparaging remarks about Mexicans bringing drugs and crime to the United States and calls to build more walls at the Mexican border stunned many Latino people during the campaign and left them with dread after he won.

It amplified tensions, especially in places like Worthington in southwestern Minnesota. The city relies on new immigrants, and people of color make up a majority. Yet 54 percent of Worthington voters picked Trump in 2016.

Jessica Velasco, a Worthington-based organizer with the group Unidos We Win, recalled her third grade son dissolving into tears the morning after the 2016 election.

“He was like, ‘Does that mean, you and dad are gonna have to leave?’ And like, ‘What’s going to happen to us?’” She’s from Texas originally, but her son didn’t know her citizenship status at that point, only that she was of Mexican heritage. She identifies as Chicana and her husband is Laotian; both are U.S. citizens.

Worry eventually turned to action around a longtime effort to get a levy passed in Worthington to expand schools filling rapidly with new immigrant kids. Voters had repeatedly rejected new borrowing for schools. Advocates, though, were galvanized by a September 2019 story in the Washington Post about a school district bus driver who was also leading the effort to kill new funding. Two months later, voters backed a $34 million school funding package.

Six months later, George Floyd was killed in Minneapolis while in police custody. Velasco and others began organizing Black Lives Matter marches and rallies. Velasco conservatively estimates that at least 30 percent of families in the Latino community in her area have mixed immigration status — so there’s a lot of natural crossover on issues of immigration, citizenship and civil rights.

This year, Latinos are projected to make up more than 13 percent of the U.S. voting population, the largest group after self-identified white voters. Early voting totals have shown that young people are turning out in force. More than 3 million 18- to 29-year-olds have already voted absentee or in early voting for the 2020 election.

Velasco’s older son, who turned 18 this April, will be voting in his first presidential election. She’s excited for him to vote. She’s told him it’s more than just for him, it’s also for his community.

She’s asked him to think about playing soccer in the summer and thinking about the parents of other kids who couldn’t make the game, “parents who either had to work or couldn’t drive because they aren’t allowed to have a driver’s license.”

Voting holds an especially deep importance for Ramirez because her parents are not eligible to vote. This will be her first presidential vote, and she said the needs and hopes of her parents will be with her as she fills in her ballot.

Many Latino families are like that — a mix of citizens, DACA recipients, permanent residents, unauthorized immigrants or immigrants with temporary protected status. All these people pay taxes but only citizens are allowed to vote.

University of Minnesota student Leidy Antonio, 22, also worked to get out the vote this year, although she won’t be able to vote next month. She’s a permanent resident applying for citizenship, a process that could take a year.

Her younger sister Sheyla, who just turned 19, can vote, and Leidy’s been helping her navigate the upcoming ballot beyond voting for president.

“I told my sister, it’s so hard knowing the due dates for everything. The primary elections, I don’t know,” Sheyla said. “It’s so complicated.”

When her favorite candidate, Vermont Sen. Bernie Sanders, dropped out of the Democratic presidential primary, she almost didn’t register, but she figured there was some good she could find in other candidates. And also, her sister wouldn’t let her walk away.

Said her sister Leidy: “I think we’re all really proud that she’s the first one that’s gonna vote for all of us.”