Born April 17, 1915, in Sioux Falls, South Dakota, Joseph Jacob Foss was 11-years-old when he first saw famed aviator Charles Lindbergh at an airport near his home, prompting his fascination with airplanes. A few years later, he decided to save for a pilot’s license after being flown around in a barnstormer’s biplane. 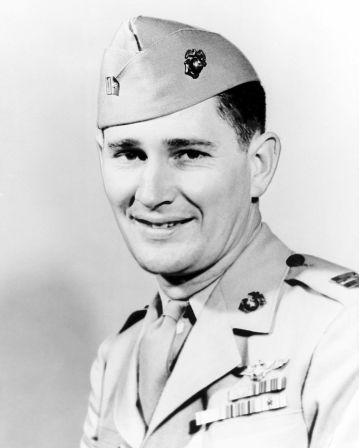 From 1939-40, Foss served in the 14th Field Artillery Regiment of the South Dakota National Guard. After obtaining his pilot’s license in 1940, he enlisted in the Marine Corps Reserves in order to join the Naval Aviation Cadet program.  Upon completion of the program and his commission as a Second Lieutenant in 1941, the 26-year-old Foss was considered too old for combat and was made a flight instructor at Naval Air Station Pensacola. He completed training at the Navy School of Photography and was transferred to Marine Photographic Squadron 1 (VMO-1) at Naval Air Station North Island near San Diego.

Foss was not pleased with his assignment and lobbied to be placed in a combat unit. While still assigned to VMO-1, Foss conducted training in a Grumman F4F Wildcat. The Marine Corps eventually relented to Foss’ request and made him the executive officer of Marine Fighting Squadron 121 (VMF-121), First Marine Aircraft Wing.

In October 1942, VMF-121 launched from the USS Copahee and flew 350 miles to Guadalcanal to base at Henderson Field, a former Japanese airbase. From Oct. 9 through Nov. 19, Foss led daily attacks against Japanese aircraft targeting Henderson Field. He gained a reputation as an aggressive fighter; by Oct. 18, he had reached the status of “ace” with five confirmed Japanese planes downed (four A6M “Zeros” and one G4M “Betty”).

During the five-week battle, he shot down a total of 23 Japanese aircraft and had several “smokers” (planes that were so badly damaged that they likely crashed). Foss was also shot down four times, including a close call when he was rescued by missionaries from shark-infested water.

On Nov. 23, 1943, Capt. Foss again led his squadron against a superior Japanese force of fighters and bombers. During the attack, he destroyed three Zeros and forced the bombers to retreat without dropping their payloads.

By the time Foss was ordered back to the United States, he had shot down 26 enemy planes and had 14 smokers. His record matched that of World War I ace Eddie Rickenbacker and was second in World War II to Gregory “Pappy” Boyington (who had 22 with the Marine Corps and claimed to have an additional six with the Flying Tigers).

Foss was stationed in San Diego when he was informed that he would receive the Medal of Honor. On May 18, 1943, President Franklin Roosevelt presented Foss with the medal in the Oval Office. Roosevelt chatted with Foss for almost an hour, keeping the secretary of state and chief of naval operations waiting in the corridor, as he asked him about the war in the Pacific (Foss later learned two of Roosevelt’s sons were fighting in the Pacific). As Foss emerged from the Oval Office, a photographer snapped his picture. The photo ran on the cover of the June 7, 1943, issue of Life Magazine.

In 1944, after participating in a war bond tour, Foss returned to combat operations in New Guinea. Although he did not shoot down any additional Japanese planes, he did get to fly with his boyhood hero, Charles Lindbergh.

In 1959, Foss was named the first commissioner of the American Football League. He held that position until 1966, when he was succeeded by Al Davis just before the AFL and NFL merger. Foss also hosted ABC’s “The American Sportsman” and was twice elected president of the National Rifle Association.

On Jan. 11, 2002, Foss was attempting to board an American West flight when he was detained by security for a suspected weapon on his person. The suspected weapon, his Medal of Honor, was passed around by security personnel who were confused about what it was. Foss, who had to explain that it was his Medal of Honor, later said of the situation, “I wasn’t upset for me. I was upset for the Medal of Honor, that they just didn’t know what it even was. It represents all of the guys who lost their lives — the guys who never came back. Everyone who put their lives on the line for their country. You’re supposed to know what the Medal of Honor is.” 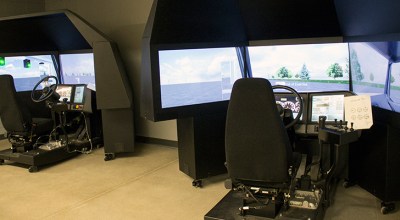 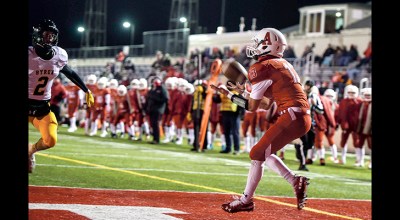