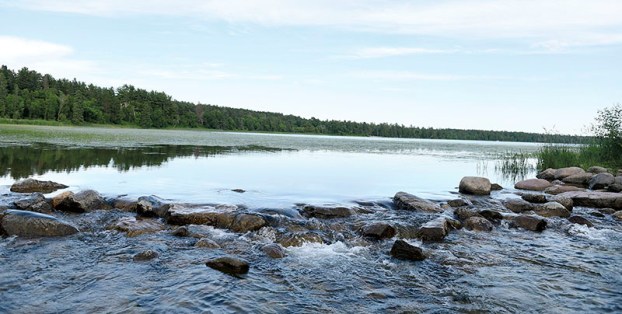 Water flows through the rocks at the headwaters of the Mississippi River at Itasca State Park north of Park Rapids, Minnesota. Eric Johnson/photodesk@austindailyherald.com

More than half a million people visit the headwaters of the Mississippi River at Itasca State Park every year, most stepping along the familiar path of stones to cross the river at its humble beginnings in north-central Minnesota.

Over decades, those many feet have eroded the shoreline, making the river’s first stretch much wider than it used to be.

This fall, the Minnesota Department of Natural Resources plans to repair that damage. The project, scheduled to begin in early October, will restore the river channel to its original width and stabilize the streambank.

“Due to heavy foot traffic, there’s been a lot of erosion,” said Connie Cox, lead interpretive naturalist at the park. “So we’ve had a lot of soil being carried into the river system.”

Cox estimates that in the past 10 years about 50 cubic yards of dirt and gravel — the equivalent of about four dump truck loads — have washed into the river.

That erosion hasn’t severely affected the water quality of the Mississippi, she said, because it’s mostly occurred in the first 20 yards or so of the river, before the footbridge that visitors frequently cross.

But the increase in visitor traffic concentrated in the first reaches of the river has significantly widened the headwaters from its earlier proportions, Cox said. As evidence, she points to historic photos from the 1900s and 1920s that show people crossing a much-narrower channel, with thick vegetation growing along the riverbanks.

“Literally, a person could stand on either side of the riverbank and almost shake hands,” she said.

Many visitors to the park don’t realize that underneath the stepping stones lies a dam, constructed in the 1930s by the Civilian Conservation Corps. Over time, the water started to flow on the sides of the dam, contributing to the streambank erosion, Cox said.

In more recent years, heavy rainfalls worsened the problem, and occasionally the water reached all the way up to the iconic wooden signpost that marks the Mississippi headwaters.

Starting in early October, the DNR plans to reshape the channel and direct water away from the shoreline. The agency also plans to stabilize the shoreline with a combination of boulders and natural vegetation that will quickly put down roots and grow to protect against erosion.

Cox said workers will reshape the stepping stones, but keep them and the underlying dam, which she called a part of the history of Itasca State Park. Aside from the narrower channel and more vegetation, the familiar appearance of the headwaters won’t change much, Cox said.

“The stones will still be there,” she said. “Some people probably won’t even notice the difference. All that it’s going to be as a subtle reshaping of which direction the stones curve.”

The project is expected to be completed in about two weeks, with actual construction lasting about five days. Visitor access to the headwaters will be restricted during the construction phase, Cox said.

Some of the funding for the $35,000 project will be paid from the Parks and Trails Fund, which was created after Minnesota voters approved the Clean Water, Land and Legacy Amendment in 2008.