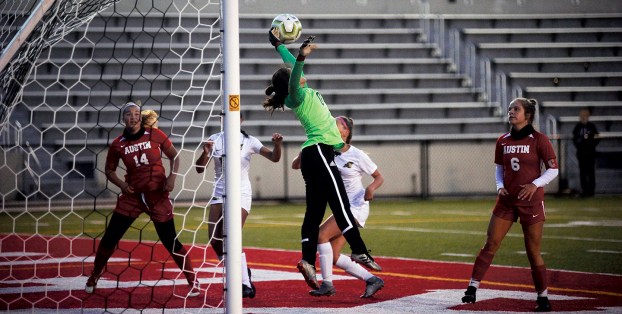 Courage under fire: Wangen learns to play keeper in loss to Mayo

Put Sarah Wangen on the field and she’s going to give it her all.

Last winter, Wangen was thrown in at goalie for the Austin girls hockey team on short notice and she’s now learning to play in the net on the fly for the Austin girls soccer team, making her first varsity start at keeper in a 3-0 loss to Rochester Mayo in Art Hass Stadium Thursday night. 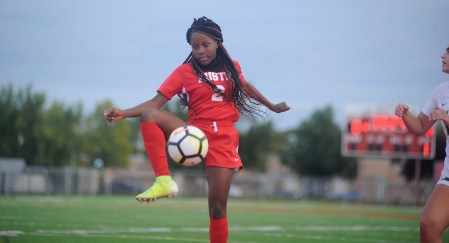 Marie Tolbert hauls in a pass for the Packers against Rochester Mayo in Art Hass Stadium Thursday. Rocky Hulne/sports@austindailyherald.com

Wangen had her hand on the ball on every goal scored by the Spartans and even felt the pain of being knocked to the ground on Mayo’s third goal of the night, but she proved she was a fighter — stopping 11 of the shots on goal she faced.

As for the three Mayo goals, Wangen tipped each of the first two scores in the first half and the third one came on a rebound after she had made a leaping save.

“It’s a little frustrating knowing I could have caught it or got a little better tip on it,” Wangen said.

In the second half, Wangen found her footing as she made a leaping save and a pair of diving saves in the first 12 minutes to keep Austin within striking distance.

Wangen last played keeper on the JV team two years ago, but she said it was much different playing the position in a varsity game.

“I’m always open to it,” Wangen said. “I would have rather been on the field, but I can be a utility player and if the team needs me to play there, I’ll do it. It’s a lot different than playing net in JV.” 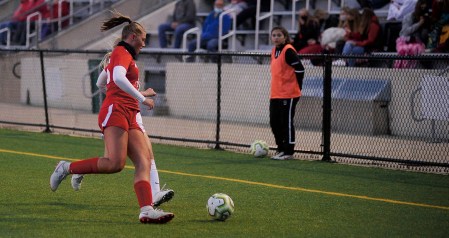 Austin head coach Jake Levisen said Wangen showed him a lot by stepping up and playing keeper on short notice.

“Playing goalie comes with a lot of pressure and Sarah showed that she had the true spirit of a teammate,” Levisen said. “She was tremendous tonight.”

Austin (1-2 overall, 1-2 Big Nine) made a couple of early pushes on offense that came up empty, but the Spartans controlled the pace for the rest of the contest.

“We played well, but we lost our rhythm a little bit,” Levisen said. “The girls have the knowledge and the skill and they just have to come out as one on the field. It comes down to the girls believing in their skill and their ability, as much as their coaches believe in them.”