A rural Dexter man who allegedly intentionally rammed his pickup truck into another vehicle, causing it to go into a ditch, made his first appearance this week in Mower County District Court. 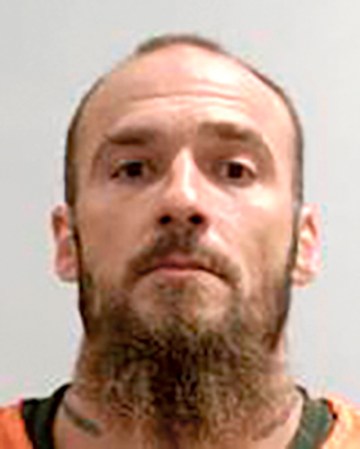 According to the court complaint, Mower County deputies were dispatched at about 9:09 p.m. on July 3 to a motor vehicle crash in the vicinity of 280th Street and 680th Avenue in Dexter Township. Deputies made contact with an adult male and adult female, both of whom were visibly upset and sweating profusely. They reported that Shulze had rammed their vehicle, forcing them into a ditch and causing a rollover. Deputies observed a red Ford Ranger pickup truck on its driver’s side in the south ditch of 280th Street.

The male indicated that Shulze was driving a grey and black Dodge pickup and that for the past month, he had been seeing Shulze’s girlfriend on and off. He stated that his neighbor allowed him to load his vehicle full of scrap and that he was driving to Dexter to collect an old washing machine and scrap from the community recycling dumpster when he noticed a Mower County squad car while heading south on County Road 7. He indicated he took gravel roads to avoid law enforcement because he had a cancelled driver status. While northbound, he said he encountered Shulze driving in the Dodge pickup and going southbound. He said Shulze turned around and went after his vehicle. He indicated that he sped up to approximately 70 mph, but Shulze continued to gain on them.

Both the male and female described Shulze hitting them “full throttle,” which caused them to spin and roll in the ditch. They were fearful Shulze was going to return, so the male went to the closest house to the east attempting to get help. The male stated that he returned and found the female was on her cellphone and he described yelling at her to get off the road in fear that Shulze would return.

Both victims had superficial scrapes, but denied medical care. Deputies observed the damaged areas of the vehicle’s rear bumper, along with scrapes and plastic transfer on the ball hitch.

Deputies attempted to contact Shulze at his residence in the 27000 block of 665th Avenue in rural Dexter. Both victims had described the vehicle Shulze was driving as a larger truck with a topper. Dispatch had noted that Shulze was connected to a 2003 Dodge Ram. When deputies arrived at the rural Dexter address, they saw that vehicle was parked in the driveway and matched the description given by the victims.

Deputies exited their vehicles and were approached by Shulze and two other subjects. When asked about his whereabouts, Shulze indicated that he had done various things throughout the day and had returned home between 7:-7:30 p.m. He denied having any contact with the victims and stated he had not had any contact with the male for over a year. The other two parties gave varying statements, but seemed to indicate that Shulze had been at the residence.

Deputies looked at Shulze’s vehicle and located damage consistent with that of the victim’s vehicle. They also noticed the truck’s windshield was very dirty as if it had been following a vehicle closely on a gravel road.

When told the victims had described his vehicle, Shulze admitted he had been driving the vehicle and said the incident was an accident. He indicated that he did not know why he left the scene, then said the male victim had stolen items from him, telling deputies he saw the victim leaving his property. He said he then followed in his vehicle and confronted the victim at a stop sign. He said the victim asked, “What are you going to do about it,” and that he “tapped” the victim’s vehicle, which went into the ditch.

When asked why he chased after the victim, Shulze said, “To beat his (expletive) because I was sick of him taking my stuff.” He told the deputies he was upset with the male for “punking him” in front of everyone, said that he “snapped” and chased him down the road. He indicated he was going “at least 60” and the male was “flying” ahead of him, then admitted that he hit the other vehicle hard enough to send it into the ditch and cause his own to go slightly into the opposite ditch.

A review of Shulze’s criminal record shows a prior conviction for first-degree burglary. He is currently awaiting disposition on charges of felony third-degree assault – substantial bodily harm – and misdemeanor domestic assault.

Shulze will appear in court again on July 16.