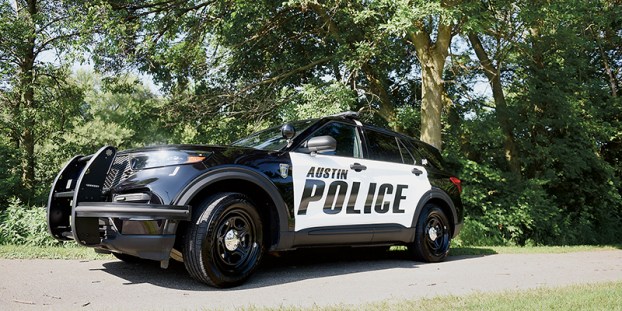 The new hybrid Ford Explorer will cut down costs for the Austin Police Department. Eric Johnson/photodesk@austindailyherald.com

The Austin Police Department has taken a step toward becoming more green as it begins changing over its fleet of squad cars to a hybrid model, using both electric and gasoline.

The vehicle, a 2020 Ford Police Interceptor Hybrid, has the capability to utilize both electric, gas or both at the same time, ensuring that power isn’t sacrificed while at the same time maintaining fuel efficiency and being environmentally friendly.

Austin police patrolman Chad Norman, who is department fleet manager, said the move to hybrids is a chance to cut the department’s footprint as well as be fiscally responsible.

“We’re always trying to spend taxpayer’s money the wisest way we can,” Norman said. “The hybrid gives us the opportunity to save, even with increased cost, $8,000 to $9,000 over the life of the vehicle.”

The new hybrid Ford Explorer will cut down costs for the Austin Police Department. Eric Johnson/photodesk@austindailyherald.com

Currently, there is only one hybrid in the fleet, a 2020 model with a price tag of $39,470, $3,500 more than previous vehicles purchased. But the hybrid engine setup will equate into savings after the four year life of the squad car is up.

“We’ll make it up in fuel savings and the trade-in value will be higher,” Norman said.

The 3.3 liter V6 doesn’t require plug-ins as the electric side will regenerate power when the vehicle slows down or comes to a stop.

Even when the vehicle is idling, which is a large amount of the time, the hybrid will continue saving money.

Sixty minutes of idling only requires the gas engine to run for 20 minutes. The remaining 40 minutes runs on the hybrid engine, which allows functions like air conditioning and heating to continue running.

“It will significantly reduce idle hours,” Norman said. “Thirty-three miles of wear are put on the vehicle for each idle hour. With 100,000 miles on the odometer, that’s an additional 9,600 of  idle hours.”

Over the lifetime of the car that will equate to 416,800 wear miles on the engine.

The gas and electric capacities are running together; acceleration will be improved when required.

When the move to the new cars is completed, all patrol cars in the 19-vehicle fleet will be replaced.