18U wraps up regular season with win, playoffs start… 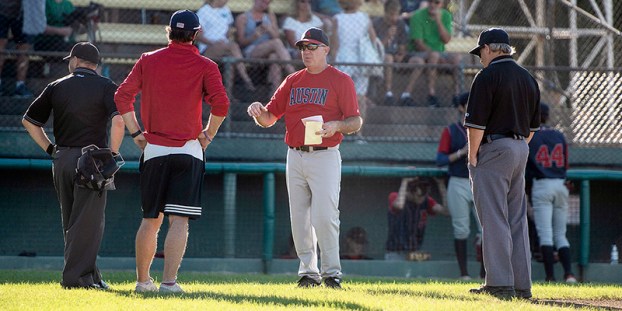 U18 manager Joe Ciola goes through pregame with umpires and the Rochester John Marshall coach during a recent game at Marcusen Park. Photos by Eric Johnson/photodesk@austindailyherald.com

A baseball fixture: Joe Ciola doing his part to continue letting the boys of summer play

Joe Ciola has had a big impact on baseball in Austin, but he has done even more behind the scenes.

Ciola is coaching the Austin Greyhounds and Austin U18 baseball team this summer, and he was slated to be the interim high school coach for the Packer baseball team in the spring before the season was called off.

Ciola’s impact also goes well beyond the white lines that form the diamond at Marcusen Park as he is on the Marcusen Park board, he helps recruit up players to play on both teams, and helps keep the field in playing condition with his sons, Alex and Anthony, throughout the summer. 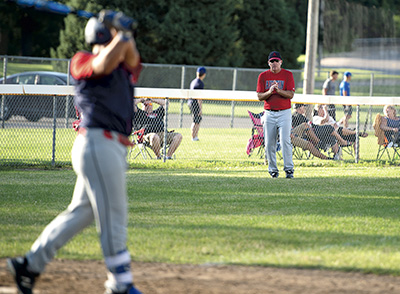 18U manager Joe Ciola coachers from third base during a recent game at Marcusen Park. Eric Johnson/photodesk@austindailyherald.com

It’s not like Joe has a lot of free time either. He stays plenty busy with his day job at Hormel Foods, but that hasn’t stopped him from going all-in on keeping baseball alive in Austin.

“It’s been no problem and it’s been easy to get the guys together,” Joe said. “They’re excited to get together and play baseball. I’m really happy that we’re able to do this. The community has been outstanding.”

This summer has seen the Greyhounds and Austin U18 play at a high level and they’ve also drawn the big crowds that Marcusen hasn’t seen in at least a decade. The increased popularity has been a result of the COVID-19 pandemic leaving fans sports hungry, and the younger, talented roster that the Greyhounds have produced under Joe.

Austin U18 assistant coach Mike Schumacher has coached with Joe since they were coaching U11 baseball together nine years ago. His sons, Andrew and Isaac, both played under Joe. Schumacher was always pleased with the guidance they received.

“When my boys were growing up, I would always ask Joe how they should throw and hit. He’s always there for advice,” Schumacher said. “He’s dedicated himself these last two years to reviving baseball in Austin, Minnesota. Austin owes a lot to him for what he’s done and I owe a lot to him. He’s taught me a lot about baseball. I wish I knew what he forgot.”

Joe led the Austin Post 91 Legion baseball team to a state tournament appearance last summer and the Austin U18 team is also on a roll this summer. He’s been successful by staying committed to improvement and knowing when to be calm in the dugout.

“He’s so down to earth and he teaches the basics on every play,” Schumacher said. “He’s always talking about what can be done better, what was done wrong and what was done right. He’s always there as a friend, a teacher and a coach. He’s just a stand up guy.”

Joe’s impact has gone well beyond Austin, as he has coached players from surrounding communities, including Lyle-Pacelli and Grand Meadow. This year’s Austin U18 team has plenty of L-P players and the Athletics have felt right at home playing for Joe.

“We’re just thankful for the opportunity he gives us to play for an Austin team,” said Jed Nelson, a Lyle senior. “He’s awesome and he’s always been welcoming to us.”

While Joe has given up some of his free time, he hasn’t missed out on family time. His wife, Mali, is often in the stands during games, Anthony has been a standout pitcher and hitter for Austin U18 this summer, and Alex has been a solid hitter and infielder for the Hounds.

Anthony said baseball is simply something that Ciola’s are drawn to.

“This is what we do every day,” he said. “We come down and we take care of the field and then we play baseball. It’s great.”