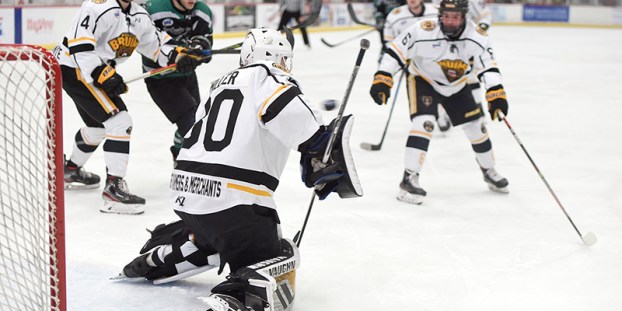 Austin goalie Brett Miller puts a block up against a shot in the first period against Chippewa Steel at Riverside Arena. Herald File Photo

The Austin City Council voted 5-2 in favor of putting summer ice in at Riverside Arena during a special session held Monday morning.

The decision reverses a previous vote held on June 15 to not place summer ice at the arena. That vote was 6-1 with opponents citing health and budget concerns as the reason for voting against placing summer ice. Austin Park and Recreation Director Kevin Nelson asked the council to make a decision on the matter to determine if the Austin Bruins could hold their summer ice camps.

The initial decision drew criticism from some in the community, including Bruins co-owner Mike Cooper.

“We can have these camps somewhere else, but we feel it’s important to support the community that supports us,” he told the council Monday morning.

Cooper noted the economic impact of the camps, which he estimates brings in about $250,000 to $300,000 every July as camp participants and their families utilize local businesses while staying in town. He also said the Bruins would be willing to help offset the operating costs incurred by the city to maintain the arena during the summer.

Since the previous vote, new government guidelines for best practices in such activities have been released. Cooper said he is hoping to work with the Austin Park and Recreation Department to implement a game plan that ensures safety for camp participants. 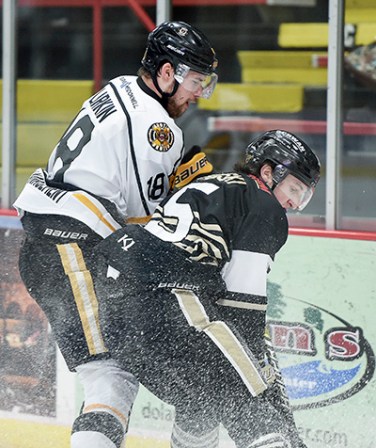 Austin’s Hugh Larkin puts on the pressure during the first period against Bismarck in Riverside Arena. Herald File Photo

Cooper said that 300 to 400 hockey players from around the country and beyond attend the camps in Austin throughout the month of July.

“It’s certainly nice to show off Riverside Arena and players get to see what it’s like to be a Bruin,” Cooper said. “But the bigger thing for us is to give back to the businesses that support us, especially in what’s been a tough year for them. That’s the biggest win.”

Nelson said the city began chilling Riverside Arena on Friday in anticipation of a “yes” vote. He estimates the ice should be complete between July 10-14.

Rocky Hulne contributed to this story 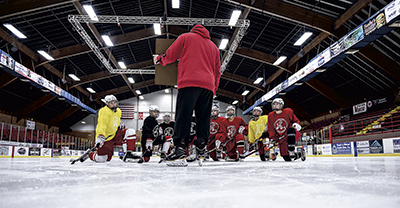