Commentary: My view on George Floyd incident: A compelling case for justice, fairness and forgiveness

Watching the video of Mr. George Floyd’s interaction with the police in Minneapolis evoked a complex mixture of emotions in people. Our reactions and emotions vary depending on our age, background, society imposed racial category, religious beliefs, political ideology, upbringing, social economic status, and residential zip code to name a few. Humans have the genetic code to distinguish between justice and injustice, fairness and unfairness, but we are conditioned by the environment in which we nurture the code. Unfortunately, many have little control over their environment when growing up, but most adults can choose good over evil and choose to modify their environment to foster the right sense of justice and fairness. From my personal journey and life experience, a third necessary ingredient to modify that environment is forgiveness. I’ll come to that later. 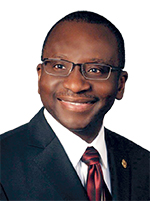 This month marks my seventh year in Minnesota. Public forums were part of the interview process when I applied to become president of Riverland Community College. I recall a question that was asked: “Why would you [a black man from tropical Africa] move to Minnesota where the winters are harsh [and the population is overwhelmingly white]?” I thought for a few seconds, then it occurred to me that I had to state the obvious. The answer was obvious to me, but it was not obvious to my audience. I prefaced the answer with what I presumed an innocuous joke. “It shouldn’t surprise you that I will move from Illinois to Minnesota. My first overseas travel was when I moved 6,000 miles from Nigeria to southern Illinois in January 1983.” Then I added the reason for my interest in the job: “Geography doesn’t matter to me. All my adult life, I have been working to level the playing field for the poor and the underserved because I grew up poor and underserved. The path to escape poverty for me several years ago remains almost foolproof today: college education and achievement of a meaningful post-secondary credential.”

I have been in the United States for 37 years. I am more American than Nigerian. My wife was born in Haiti, but grew up in Chicago. She speaks English, French and Haitian Creole. My two children were born in the U.S. My two granddaughters are multi-racial. I learned French and Spanish enough to get by. Most of my interactions with law enforcement have been positive. White police officers have given me warnings when they could justifiably have issued me tickets. Every week I attend multi-racial religious services. Several of you are my friends, although you are not black. Some are acquaintances and a few are close friends. That’s just the way life is. My wife and I keep striving to strengthen bonds of friendships and serve as role models. At the end of the day, Riverland, as an open access community college, is fortunate enough to educate others and make our world a better place by helping level the playing field for the less privileged. There are many lanes on the road to racial justice, equity, and peace. Violence is not one of them. Hatred is not one of them. Weaponizing a person’s race or ethnicity to one’s advantage is not one of them. What are some ways? Awareness! Donations to worthy causes may be your contribution. I received a heartwarming unsolicited surprising note from one of Riverland’s faculty last week:

“I want to thank you for your focused – and compassionate – leadership during this great time of transition and crisis. As we enter this time of COVID-19 together, I am confident that, collectively, we have served our students with integrity and grace. I was heartened to hear the commencement address of one of my students, Modeste Zinzindohoue – and I immediately reached out to him last Friday to tell him how moving his message was to me. He showed such poise and optimism. I wanted to extend that same gratitude to you.

This last week, in partnership with…Area United Way, [Our] Family Foundation distributed 1,700 hardcover books of “Where the Sidewalk Ends” to area Fourth Graders. This was our fourth year with this literacy program – and we were all disappointed that we could not visit their classrooms to read poems with them (yet another loss among many this spring).”

The Hormel Foundation Austin Assurance Scholarship is another example of a game-changing contribution that levels the playing field. Just imagine thousands of students of diverse backgrounds whose lives will be changed forever for the better because of the gap funding to earn a college degree and graduate from Riverland with no student loan or debt! Riverland’s daily contributions may seem small monetarily, but just as small drops of rain collectively cause a seed to germinate, do not underestimate the power of the collective drops. Those contributions may not even be financial. It may be in the classroom, as a designated student advisor, as human resource personnel, as an informal advisor, as an administrator, as a hiring manager, as support staff, as a volunteer on a service organization, as a board member of Riverland Foundation, or as a tax-paying resident in the community. Remember there is power and hope in numbers. If everybody does a little more, our world will be a more just and peaceful place to live.

The colleges and universities of Minnesota State are blessed to have 10 presidents of color, eight of whom are black. What a tremendous resource! I don’t believe the rich diversity in Minnesota State colleges and universities presidents is an accident; some decision-makers did the right thing and we should acknowledge the bold and courageous people that made it possible.

It’s important to note, a total of 22 Professional Peace Officer Education (PPOE) programs are offered by Minnesota State that are certified by the POST board, educating approximately 80 percent of Minnesota’s police officers. Riverland has one of these programs. Our stories, experiences, and curriculla can help leverage action, increase understanding of the real impact of racism, and position Minnesota State as a leader in standing for social justice against systemic discrimination and bias. Yes, there is much work ahead of us and we must not let the momentum die or wane. We can do more.

At some point in our personal and professional lives, all of us must navigate uncharted waters.  We make mistakes and learn from them. Some mistakes were made for us and we become accomplices by mob action or ignorant policies. This brings us to the importance of forgiveness. We all need forgiveness to make our world a better place. We must forgive oneself and the other person. Grudges are a heavy load to carry. Whether you are a police officer or a politician, a parent or a pastor, a priest or a president, a public servant or a private entrepreneur, a piper or a pauper, “we all do better when we all do better!”