Venus has just left the evening sky, and now Jupiter and Saturn are moving in. By mid-month both will be up in the southeast before midnight. Jupiter, by far the brighter planet, shines west of Saturn and leads the ringed planet across the night sky.

Mars doesn’t quite make it into the evening sky. But it rises earlier each day, approaching midnight from the morning side. By dawn Mars will be a fairly bright dot in the southeast. As for Venus, it reappears in the morning sky this month, but doesn’t climb out of the sun’s foreglow until late June or early July. 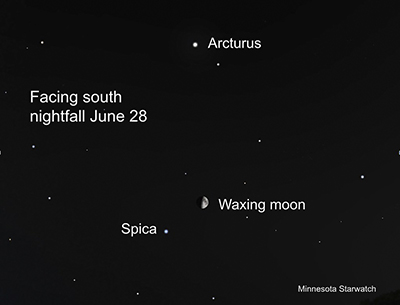 If you’re out at nightfall, the brilliant star Arcturus dominates the southern sky. Arcturus, the jewel of kite-shaped Bootes, the herdsman, is the brightest star in the northern hemisphere of sky. However, it’s barely brighter than Vega—the beacon to the east of Arcturus—so they can be considered co-holders of that title.

Between the 28th and 29th, a waxing moon glides between Arcturus and Spica, the brightest star in Virgo, the maiden, which shines about 30 degrees below Arcturus. Whenever Spica is up, you can find it by following the curve of the Big Dipper’s handle —always somewhere to the north—to locate Arcturus, then keeping going to find Spica. In other words, “arc to Arcturus, speed on to Spica.”

June’s full moon arrives at 2:12 p.m. on the 5th. It follows Scorpius and Antares, the scorpion’s bright red heart, across the night sky. Jupiter and Saturn follow the moon that night; between Jupiter and the moon is the Teapot of Sagittarius.

If you like challenges, look for a very old crescent moon to the lower left of Venus, right above the east-northeastern horizon about half an hour before sunrise on June 19. Then look for an extremely young and thin crescent moon getting ready to set over the western horizon at nightfall on the 23rd. Use binoculars, and see if you can find the Beehive star cluster right below the moon.

Summer begins with the solstice, at 4:44 p.m. on the 20th. At that moment the sun reaches a point over the Tropic of Cancer, and an observer from space would see Earth lighted from the Antarctic Circle up to the North Pole and beyond to the Arctic Circle on the night side of the planet.