Latest on COVID-19 in MN: Schools likely closed for… 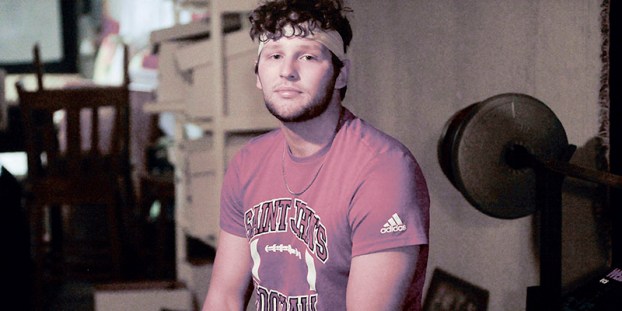 Austin grad Logan Braaten is one of the many NCAA athletes who are now displaced and waiting for the COVID-19 pandemic to calm down. Rocky Hulne/sports@austindailyherald.com

What’s Next: College athletes looking at next steps as COVID-19 causes interruptions

The winds of change softly drifted into the NCAA sports world, but it was just a matter of days before they blasted to a roar — scattering athletes all over the country away from their sports and into an immediate state of social isolation.

Three Austin grads were immensely affected by the outbreak of COVID-19 when the NCAA recently cancelled all spring championships and most students switched to E-learning. University of North Dakota distance runner Madison Overby had her breakout season and possibly her NCAA career come to an end, University of Sioux Falls thrower Pat Hagen learned a new meaning to patience, and St. John’s University football player Logan Braaten went from the verge of spring football practice to his parent’s basement. 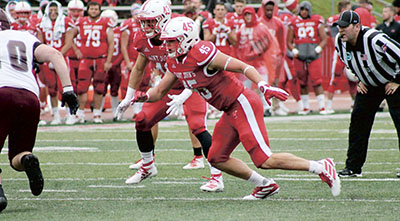 Like all other college athletes, Braaten normally has very limited free time as his studies, workouts and football obligations keep him busy, but he now sets his alarm for 10 a.m. every day to make sure he doesn’t sleep it away. His duties include a couple of hours of online courses each day and he also tries to get in whatever workout he can with his dad’s old weight set in the basement. That basement also includes all of Braaten’s belongings that he had to pack up and bring to Austin on very short notice.

After a lengthy session of winter workouts, Braaten had been focused on getting back on the football field, but now he’s not sure when that will happen.

“I was actually going to get to play some football and I was really looking forward to it. Now I’m not sure what’s going on. They were supposed to be selling tickets to our game against Saint Thomas at US Bank Stadium, but they put those on hold,” Braaten said. “When I first got to school, I honestly thought I wouldn’t stick with football, but now I can’t picture living without it. I love it at Saint John’s. The team becomes your family and you see those guys every day.”

Braaten had planned on spending the summer working and living near Saint John’s, but now he’s not sure when he will even get back on campus. His entire life is on hold until society returns to its normal ways.

“Our days were so busy with school, workouts and then football and now we have nothing but time,” Braaten said. “You get used to managing everything into your schedule and now we have the opposite problem.” 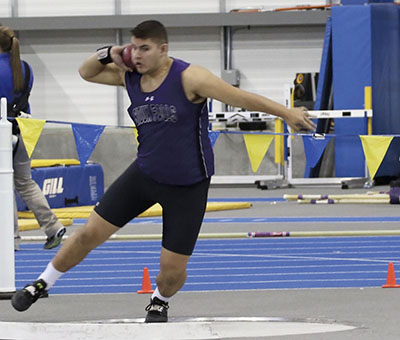 Hagen, a junior at USF, hadn’t thrown competitively in a year due to injuries, ever since he took 24th in the weight throw at the Northern Sun Indoor championships in 2019. Now he’ll have to wait a whole lot longer before he can throw in a meet. Hagen won’t even be able to see any of his coaches until June 1.

“I’m just waiting it out and I’ll get back to throwing next year. I’m just weathering out the storm,” Hagen said. “I was in shock for a couple of days. With the NBA getting shut down and then March Madness, we thought this might affect us. Then they cancelled all NCAA spring championships. It was a shock.”

Hagen is still living in Sioux Falls and he is doing his school work through online forums and some Skype meetings.

Hagen plans on using his last two years of eligibility with the Cougars track and field team, but right now there isn’t a lot he can do to improve his throws. He has taken up disc golfing when he gets the chance, but most of his activities are indoors.

“On the team we talk about controlling the controllables,” Hagen said. “This is out of our hands so we’re trying to make it the best. We’re focusing on academics right now and we’ll try in-home workouts.”

Hagen was a three-sport athlete at Austin and he played in a state basketball tournament for the Packers. It is very difficult for him to not have a schedule that doesn’t currently include a team workout or a sporting event.

“My drive right now is through the roof to get back in the ring,” he said. “I just hope everyone stays safe.” 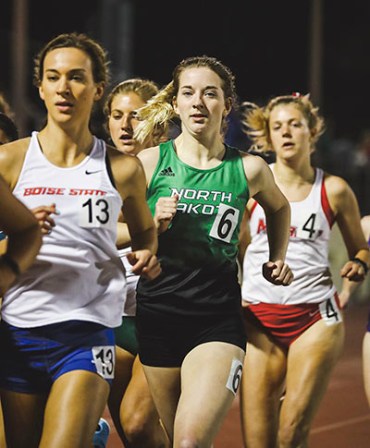 Austin grad Madison Overby recently wrapped up what is likely her final season at the University of North Dakota. Photo provided

Walking through a ghost town

Overby was having the best senior season she could imagine at UND. She finished in 77th place at the NCAA Midwest Cross Country Regionals, she was a member of the distance medley relay team that took second in the Summit League Indoor Track and Field Championship and she had the fourth fastest mile time in the Summit League, but wasn’t able to finish in the conference finals due to an injury she battled for much of the season.

Besides her athletic success, Overby was accepted to attend dental school at Harvard University in Cambridge next fall, but the COVID-19 outbreak has made her wonder if that will even happen.

Ovebry is leaning towards forgoing her last year of track and field eligibility at UND to attend Harvard next year; her future is up in the air as long as the virus is lingering.

Now Overby goes through a daily running schedule for meets she’ll never run in as she spends most of her time at home in Grand Forks. It’s not the way she pictured her senior year when she moved to campus four years ago.

“Never in my wildest dreams would I have imagined that I would be finishing up my undergrad online in a ghost town,” Overby said. “It is nice to have my two roommates, who are my teammates and my two best friends. We kind of lean on each other. It’s very surreal, that’s for sure. I’m out on a high note (with running) and I like that.”

Overby found out that her season was ending on the bus while the Fighting Hawks were traveling to Myrtle Beach, Florida, for their first outdoor meet of the season. The team was busy checking social media when it found out the spring championships had been cancelled.

“Everyone on the team thought it was too early to cancel,” Overby said. “I think everybody was kind of in denial. I think there was almost kind of a grieving process where you’re losing that chance to prove all of your hard work and you miss out on the travel with the team, which is the fun part. It was just getting good with the outdoor season. It was really a big blow.”

Overby PR’d in all of her events this year and she was All-Summit League in cross country and indoor track. Overby has the fastest mile time in UND’s Division I history at 4:24.24 and she was a Summit League All-Academic selection this year.

“This is by far my best year,” she said. “I can still run on my own, but the season is everything and you only have a finite time where you can compete. College athletics is the peak and when your whole life is centered around it, your life will never be like that again.”