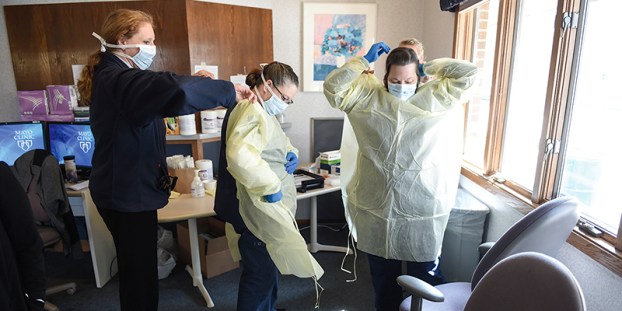 Medical staff put on protective clothing at the newly set-up drive-thru clinic for COVID-19 testing. The Minnesota House passed a bill ensuring first responders and healthcare workers on the front lines will be eligible for workman's compensation, even if they can't prove they caught the virus at work. Herald file photo

MINNEAPOLIS (AP) — Minnesota’s coronavirus infection count surpassed 1,000 Tuesday, as lawmakers moved closer to passing legislation to ensure first responders and health care workers on the front lines of the battle against COVID-19 qualify for workers compensation, even if they can’t prove they caught the virus at work.

A surreal scene played out on the House floor as representatives passed the bill 130-4 and sent it to the Senate for its expected approval. The chamber was almost empty except for a handful of lawmakers and staffers. Hortman and others wore masks, and they sat far apart to ensure social distancing.

Most representatives joined by phone, some from their homes in rural Minnesota, while others drove to St. Paul and participated from their cars to ensure that the House met the constitutional requirement that at least 90 were “at the seat of government,” meaning in the capital city.

The Minnesota Department of Health reported 83 new cases Tuesday, taking the state’s total to 1,069. It reported four new deaths, for a total of 34. The department said 120 patients were hospitalized as of Tuesday, an increase of five, while 64 were in intensive care, up seven from Monday.

Health officials say 549 patients have recovered and no longer need to be isolated, but caution that the true number of infections is likely much higher because not everyone qualifies for testing.

Minnesota’s workers compensation laws normally require an employee to prove they got sick or were injured on the job. The legislation changes that requirement for first responders and health care workers, as well as child care workers who serve the families of front-line employees.

“It will be very difficult for some of our first responders to be able to establish exactly how they got COVID-19, but we know they’re at much higher risk for contracting this disease because of the work that they’re doing for us,” Democratic House Speaker Melissa Hortman said on a conference call with reporters. “They are putting themselves on the line out there.”

Under the new rules, a doctor’s diagnosis of COVID-19 without a test to confirm it would be acceptable.

“People on the front lines in this pandemic need to have the support of all of us,” Democratic House Majority Ryan Winkler said. “… We need to make sure that as they go into harm’s way, as they step in to help people without knowing if they have COVID-19 or any other health condition, that we are there to support them.”

Hortman and Winkler acknowledged that changing the rules is likely to impose new costs on the workers compensation system, that they don’t know how many claims will be filed, and that lawmakers have yet to figure how how they’ll pay for it. They’re hoping to use some of the $2.1 billion that Minnesota is getting in federal stimulus money to cover part of the new costs.

The Legislature is next scheduled to meet April 14.