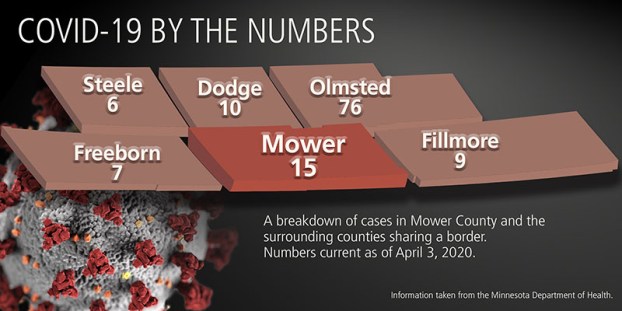 Mayo Clinic Health System officials are planning how to best utilize Mayo facilities in the region in the event of a surge in COVID-19 hospitalizations in the coming weeks.

Dr. Deepi Goyal, Mayo Clinic Health System regional chairman of clinical practice and emergency medicine physician for southeast Minnesota, said Friday he and others are monitoring how cases are developing in the country to get a projection of what the state’s cases might look like in the coming weeks.

Goyal said he anticipates seeing larger numbers in late April and early May, and Mayo is figuring out where there is a capacity for extra patients to go, if necessary.

He said both the Albert Lea and Austin campuses are part of the planning, and they are looking at where to treat not only patients with the virus, but other patients who might still need to come in for other medical treatment. They’re also planning for appropriate staffing.

Space has been identified at the Albert Lea hospital that is available, including the former Baby Place on the third floor of the hospital as well as the second floor where overnight hospitalizations had been previously.

“All that space is available and open to use,” Goyal said. “We would just need to get it activated again.”

He said officials think they could do that within a 24- to 36-hour notice if necessary.

Officials are also looking at potential spaces in the Austin hospital that can be expanded for patient care, as non-urgent treatments are reduced at this time.

He said changes will happen in a phased approach while considering how to best help all of the communities that the health system serves.

“We’re working with Rochester to come up with a comprehensive surge plan for the region,” Goyal said.

He said the health system is no longer taking new patients to the Fountain Centers drug and alcohol treatment program or extended care programs for the time being. Much of these programs rely a lot on group activities and aren’t designed to keep patients separate.

He said this was a difficult decision, and health system leaders had to balance the risks of doing so with the risks of keeping the facility open to new patients.

“We’re looking at other ways to provide their treatment without putting them into close contact there,” he said, referencing video or telemedicine options.

The discussion comes as the Minnesota Department of Health announced Friday confirmed cases across the state increased to 789. Twenty-two people have died from the virus, and 86 were hospitalized as of Friday, including 40 in intensive care.

More than half of the patients across the state have recovered and no longer need to be isolated.

The Department of Health states 32 percent of cases across the state were exposed to the virus through community transmission, with the next highest reason coming from a known exposure to a case. For 10 percent of patients, the exposure is unknown or missing.

According to the state department, there have been 24,227 completed tests, including 8,682 through the Minnesota Department of Health’s public health lab and 15,545 through external laboratories. Not all suspected cases of COVID-19 are tested, so this data is not representative of the total number of people in Minnesota who have or had COVID-19.

Goyal said it is critical for people to follow social distancing guidelines put in place at the state level and said he supported the new recommendations for people to wear face masks, noting that people can transmit the virus even before they have symptoms.

“It’s ever more important that people abide by that shelter in place order and try to minimize contact,” he said.

He reminded residents that Mayo is still open for people who need access to care and encouraged people to call their provider for non-emergent needs to figure out how to best get the care they need.