Minnesotans appear to be mediocre in following social distancing guidelines compared to other states, according to one company, which gave the state a “C” grade for its efforts during the COVID-19 pandemic.

Tech company Unacast this week launched a Social Distancing Scoreboard that uses cellphone data to compare average distance people traveled prior to COVID-19 and how much they travel now. 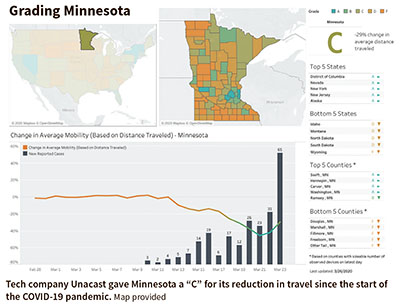 The GPS data is collected through various apps that people have installed on their phones and is typically used for marketing and advertising purposes.

The company said it is analyzing this data and comparing it with the number of reported coronavirus cases, showing a correlation with changes in behavior over time. It has also explored changes in average time spent in and around the home and how many people no longer gathered in the same location at the same time.

According to Unacast’s data through Thursday, Minnesotans changed their average traveling distance by 29 percent.

The top states to reduce their travel were Nevada by 49 percent, New York by 45 percent, New Jersey by 42 percent and Alaska by 41 percent. At the top was Washington, D.C., where residents lowered their traveling distance by 57 percent.

The company also provides statistics on the county level.

Almost all counties in south-central Minnesota were given ratings lower than the state average. The company gave F ratings to Faribault, Freeborn, Mower and Steele counties. Waseca and Dodge counties had a D rating and Olmsted County had a B rating.

Hennepin, Carver, Washington and Swift counties were the only counties in the state to receive A ratings.