Austin senior Oliver Andersen works out with a log in his yard Tuesday. Rocky Hulne/sports@austindailyherald.com

Austin senior Oliver Andersen could pass for a lumberjack in any line-up and he couldn’t resist taking his turn at it when his family was cutting down a tree this week.

Andersen, who has committed to play football and throw for the track and field team at Minnesota State University in Mankato next year, noticed a 200-pound log on the ground and he put it to good use.

With gyms and weight rooms shut down due to the COVID-19 outbreak, plenty of athletes have had to get creative in their workout techniques like Andersen did this week. 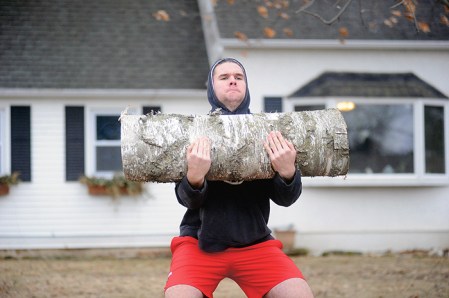 Austin senior Oliver Andersen lifts a log in his front yard in Austin Tuesday. With all gyms closed, Andersen has found new ways to work out. Rocky Hulne/sports@austindailyherald.com

He didn’t necessarily go into the week with a plan to squat with a giant piece of lumber, but Andersen made it work.

“We were kind of joking around that I could probably lift some of the wood as a workout and we found a pretty straight piece that was about 200 pounds. It actually makes a pretty good workout,” Andersen said. “It is fun. I do miss the weight rooms though because you can measure it, you know what you’re doing and you’ve got things that people have planned out.”

Andersen took sixth place in discus in last year’s Minnesota Class A State Track and Field Meet, and was also a solid shot putter as well. He had high hopes for this upcoming season, which is now in limbo.

Without any meets to plan for at the moment, Andersen is encouraging other Big Nine throwers to record their throws, measure them and post them on twitter under the hashtag #MarkitChat. If Andersen has it his way, there will be a virtual track and field meet for throwers across the state from 3-5 p.m. every Tuesday and Thursday until sports return.

Posting his throws online has been a great way for Andersen to cope with the possibility of not having a spring season.

“It’s really hard for me personally. I really wanted to go compete at state and I wanted to win. I knew I wasn’t going to be the top guy, but I wanted to compete and win,” Andersen said. “I do feel worse for the basketball kids, because some of them might not be able to play in college. They didn’t get the send-off where they went off in a blaze of glory. It’s just done.”

Andersen considers himself lucky to have college athletics waiting for him after high school, but many seniors who won’t play in college are struggling with the decision to focus on their sport, with the possibility that it won’t be played, or to take it easy for the next two months.

“I think one of the biggest things that we’re thinking about is that we don’t want to be stagnant,” Andersen said. “There is the thought that we’re not going to have this so why would I work? But in the hope that there is a season, we want to be as prepared as possible so that we can compete at a high level and not have much of a drop off in competition.” 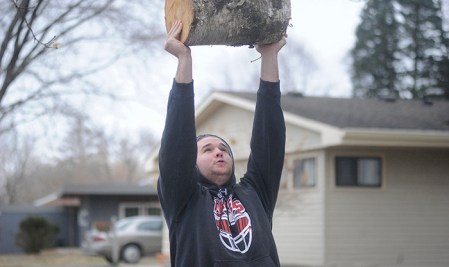