Marlyn A. Sayles, 90, formerly of Austin, Minnesota, passed away on Wednesday, March 18, 2020, at her residence in Apple Valley, Minnesota, from age-related issues.

She was born to Carl Johan and Myrtle (Vickerman) Johnson on Nov, 3, 1929, in Amherst Township, Fillmore County, Minnesota, one of six children.  She was proud to say she was born “in the Big Woods of Fillmore County.” She spent her childhood in Amherst and later Newburg, Minnesota. As a teenager, she moved to Austin, where she worked a variety of jobs, including that of being a nanny, in a dry-cleaning shop and the cosmetic department of the old Woolworth’s Store on Main Street. Her last job before marriage was with the Jay C. Hormel Company as a mail clerk, which she greatly enjoyed. She met and kept lifelong friends from these early days. 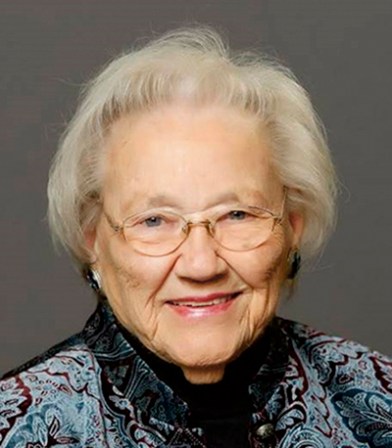 She attended weekend dances at the Oasis Club south of Austin, where she met the love of her life, Wilbur Sayles, the “Singer in the Band.” They were married April 11, 1949, at the Little Brown Church in Nashua, Iowa, and lived thereafter south of Austin in the Enterprise Community. She attended all community events, including neighborhood clubs, projects and cemetery association meetings. Marlyn and Wilbur owned and operated the Accordion Shop for many years. Later she joined her husband traveling throughout the U.S. while he presented Lay Music Missions. She loved music and singing, and was an accomplished yodeler. She knew the words to hundreds of songs by memory. Marlyn and Wilbur enjoyed 62 years of married life together.

She was a homemaker in the fullest sense of the word. A child of the Great Depression, she saved every scrap, article and paper “in case we needed it someday.” She was a good cook and baker, known for her bread, cinnamon rolls, peanut brittle, jams, jellies and pickles. She worked for many years in the church basement kitchen, helping to serve innumerable dinners, weddings and funerals. Her church was very important to her; she served on her WSCS Circle and at the communion altar for many years.

Marlyn was a gifted seamstress and sewed for family and others throughout her life. She tailor-made suits, wedding dresses, formals, and did assorted mending for others. She took an extension class in upholstery and sewed projects for various clients. She served as the sewing leader for the Enterprise 4-H Club for many years and taught many young girls in the community to sew and tailor clothing.

Gardening and nature were her special loves. She could name every flower and identify every bird by its song and flight. Her gardens were beautiful and extraordinary and she loved being outside whenever possible. Her indoor plants were truly amazing. She was a member of the Austin Hoe and Grow Garden Club and Austin Violet Club for many years. She created a special garden while living at the Cedars Residence in Austin.

Due to health issues, she moved to Apple Valley Ecumen Centennial House to be close to her immediate family. She entered into community life there with the same exuberance she did everything. She made many new friends there, always introducing herself as “Marlyn… Marilyn-without-the-i!” The family is humbly grateful to the Ecumen Staff and Blue Stone Hospice for their kind and excellent care during her recent illnesses.

Funeral services are pending with Clasen-Jordan Mortuary and will be announced at a later date. Any memorials may be directed to the First United Church in Austin.