Mayo continuing to take steps in effort against COVID-19 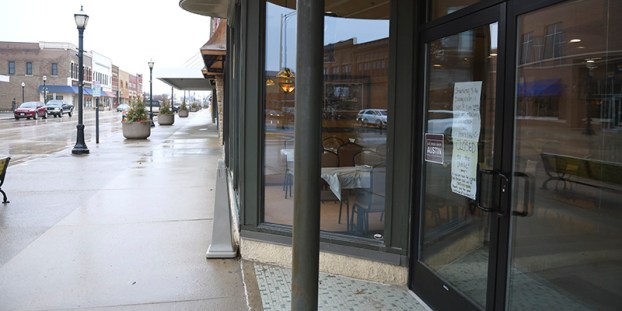 A sign on the door of Steve’s Pizza announces to an empty sidewalk that is closed to business because of COVID-19. Eric Johnson/photodesk@austindailyherald.com

Minnesota now has four deaths linked to COVID-19, up from two Thursday, and the number of cases has jumped to 398 from 346, state health officials reported Friday.

Authorities have been bracing the public for more deaths as testing expands and more tests come up positive; 34 people are hospitalized currently. Among those who’ve contracted the disease in Minnesota, 180 no longer need to be isolated.

Gov. Tim Walz is expected to brief reporters at 2 p.m. with the latest on the state’s response to the pandemic.

On Thursday, he said the age ranges of those affected ran from 5 months to 104. He continued urging Minnesotans to stay home to help “break the chain” of the disease’s spread. Restaurants remain takeout-only; public school buildings are shuttered now until early May.

The governor’s two-week, stay-at-home order kicks in Saturday. Rosedale, Burnsville and HarMar malls are expected to close over the weekend. The Mall of America is already closed.

On Friday, authorities said they would close vehicle services offices at the end of business Friday through April 10 to comply with Walz’s order. The state will extend expiration dates for licenses and permits set to expire in this period.

The jump in cases from Wednesday to Thursday was among the largest single-day increases the state’s seen since the pandemic arrived. Health Commissioner Jan Malcolm indicated officials were preparing for more cases and casualties.

Besides working to slow the spread of the coronavirus so it doesn’t overwhelm the health care system, state leaders are trying to confront the economic toll created by tens of thousands of Minnesotans thrown out of work. About 28 percent of working Minnesotans will be temporarily jobless the next couple of weeks.

State lawmakers Thursday backed a $330 million rescue plan that aims to head off some economic, health and spillover consequences of the pandemic. Together with an earlier package, the Legislature has OK’d more than $500 million, with Capitol leaders saying more actions will follow.

Beyond the pandemic and the strain it’s causing on the state’s health care and economy, Walz and state leaders are wrestling with other tough issues.

For instance, the governor and others are urging Minnesotans not to head for their cabins in greater Minnesota to ride out the pandemic, warning that could overwhelm rural stores and hospitals if people get sick in lake country or spread the virus there.

Officials are also increasingly worried about the spread of hate. Reports are rising about Minnesotans of Asian descent being targeted for hate speech or discrimination in the state, apparently because of the outbreak’s reported origin in China. Walz on Thursday said Minnesotans were better than that.

And as Walz continues to call on Minnesotans to keep their distance to help slow the spread of the disease, reporters asked him whether the Minnesota State Fair might be at risk of being called off or postponed from its historical late August-early September run.

The fair puts hundreds of thousands of people close together each year; Walz and other officials have expressed concerns that Minnesota and other states will be dealing with coronavirus cases through the summer.

“Minnesota does need the State Fair,” he said, adding that it was probably too early to make a call. “It would certainly be my hope by the time we got to that point, we’d have a handle on this thing.”