Mary Davidson, Mower County Jail Program Coordinator, gives lots of credit to the staff with whom she works.

“When you see someone who works at a jail, thank them,” Mary advises.

It is challenging to work with such a diverse group of people and to keep the peace. Many inmates have a severe and persistent mental illness along with co-occurring chemical use addictions. 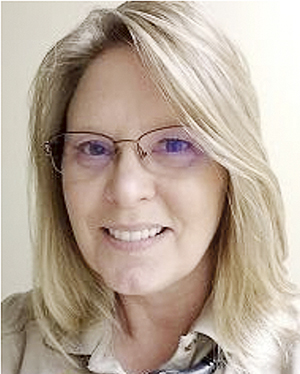 There is also a potential for violence or a medical emergency to occur at any given moment.  Working in a jail environment is very stressful emotionally and physically for correctional staff, having to be “on,” that is alert, every minute of their shift in order to ensure the safety of themselves, their fellow co-workers, and the inmates in their care.

“Even missing seeing a dropped paper clip can result in an inmate using it as a weapon or as a tool for self-harm. You have to be aware of everything,” Mary said.

Mary comes from a law enforcement family. Her father was a Minnesota State Trooper for 25 years and her two brothers have both been in police work. Mary’s first job in law enforcement was here in Austin. Twenty-seven years ago, she was enrolled at Alexandria Technical College, near her home in Osakis, preparing for work in the hospitality industry and working part-time in a nursing home. Her brother, who is now a retired Austin Police Officer, told her of the job opening at the Mower County jail working inmates.  She got the job.

“To put it in perspective of how long ago that was,” Mary said, “so far I’ve worked under four different sheriffs and three jail administrators.”

As plans for the new Justice Center were being made in 2010, Mary was part of the transition team preparing to go from the old linear style jail to a new direct supervision type of jail management. That meant there were no longer going to be any bars in the new jail and the staff were going to be working directly in the housing units with the inmates.  It was also at this time that Mary was promoted to Program Coordinator to manage the inmate program department.

Mary emphasizes that the first priority of the jail is always safety and security. But, incarceration can get boring sometimes and inmates need constructive things to do to occupy their time or they will occupy staff’s time … in a bad way.

In the old jail, there had been only one make-shift classroom and five volunteers.  The new jail was built with two classrooms specifically designed for inmate use. Mary spent hours searching on the internet for how best to take on this new job. She also began to network with other jails to learn about their programs. Mary became a member of Minnesota Jail Programs and Services (MJPS), which is a division of the Minnesota Sheriff’s Association. MJPS connects all the programmers together in the State of Minnesota. This organization was very helpful in Mary’s search for “best practices” and support. Currently, Mary is serving her last term on the MJPS Executive Board as Past President.

Part of Mary’s job is to find, screen, train, and support volunteers. Today, the jail has about 30 active community volunteers and plenty of programming for the inmates. The programs are designed to challenge participants to accept responsibility for their behavior and to take deliberate steps towards change.

The goal is to provide inmates with the tools necessary to help them stay out of jail once they have returned to our community. Key topics include: personal relationships, criminal thinking and behavior, controlling negative emotions, chemical dependency, and parenting.

Community volunteers and agencies have really come together to support the jail’s mission. Meaningful inmate programs would not be possible without their support. The jail partners with local churches and other agencies like the Parenting Resource Center, Crime Victims Resource Center, and our local AA club, to name a few.

Most recently, the jail has partnered with probation officers from Correctional Services who facilitate a cognitive behavioral program called “Decision Points” that is making a promising impact. Mary says the inmates love this program because it focuses on their own real life situations and it helps them learn to make decisions for a more favorable outcome.

Last year, Mower County was awarded the 2019 MJPS Kay Siebrass Program of the Year award for its partnership with Recovery Is Happening (RIH) from Rochester. RIH is Minnesota’s leading non-profit, full service Recovery Community Organization. It was through MJPS that Mary was introduced to its founder and Executive Director, Tiffany Hunsley.

Tiffany’s story is remarkable and inspiring. She personally battled and persevered through substance use challenges herself and made the decision in 2011 to dedicate her life to serving others.

RIH trains former addicts now living a life of recovery to become Peer Recovery Specialists to help those currently struggling. The jail has two Peer Recovery Specialists that meet with the inmates in jail and then help them get connected to the right resources when they get out of jail.   Mary says that Austin’s recovery community is really starting to flourish, due in part to the addition of the work that RIH is doing in our community.

Also last year, the Mower County Sheriff’s Office hosted its first jail volunteer appreciation party in May 2019.  “It was a blessing to be a part of it,” Mary said.  Five former inmates came to say thank you to the volunteers for the help they received while they were in jail.  One of those former inmates is now employed by RIH as a Peer Recovery Specialist and helping those that are currently incarcerated transition into a life of recovery.

“It doesn’t get any better than that!” she said.

It is times like this that keeps Mary going at her extraordinarily difficult job. Small signs that her work has made a difference in lives, plus the philosophy that “Wherever you are, do the best you can” are the ways that she finds strength, along with a strong faith and a supportive family.

“I certainly don’t do this work alone,” Mary said.  “It’s thanks to the jail staff for their hard work in keeping our community safe and to the volunteers for their dedication to making a difference in the lives of others.”

Thank you, Mary Davidson, and to your colleagues for doing this highly specialized and challenging work that you do to make Austin a safer and better place.

For more information about the Austin Branch of AAUW, contact Sue Grove  sue.grove@riverland.edu  or Carolyn Bogott  csbogott@charter.net. The American Association of University Women, now AAUW, is open to anyone who has completed a two-year degree or beyond.  AAUW welcomes men who support our objectives and there are student memberships available. AAUW has been empowering women since 1881.  We support equity and education for women.  Scholarships are offered, as well as help in litigation in cases dealing with sex discrimination.  We are the most important and highly respected research and lobbying organization dealing with women’s issues such as equal opportunity and job equality.