An overthinker’s guide to homebrewing 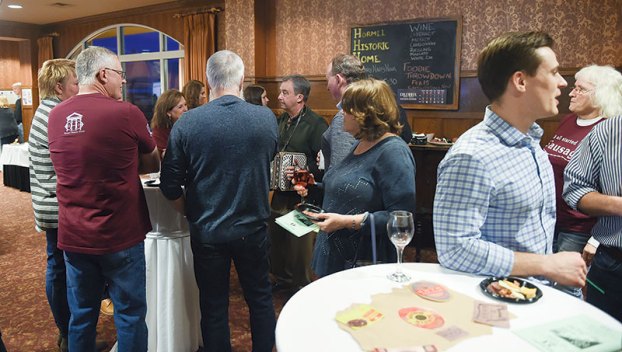 Hospitality is one of the key missions of the Hormel Historic Home today. However, the YWCA in the 1930s also focused on teaching effective ways of entertaining. In the YWCA Notes section of the Feb. 9, 1932, newspaper, the following was written:

“A meal cooked in one pot, served on one platter and eaten from one plate, is one of the many helpful suggestions for the conservation of time and energy that will be stressed in the talk on “Table Service and Food Problems”, Friday night at the YWCA. This first number of the Household Efficiency class will be given by Mrs. M.E. Cook assisted by Mrs. S.K. Caldwell. An attractive part of the program will be a demonstration of the serving of a four course luncheon.”

One of the Hormel Historic Home’s finest ways of showing hospitality in action is at the annual Foodie Throwdown event. We don’t necessarily teach you about table service at this event, but we do encourage having fun and appreciating what the chefs for the night have prepared.

With one veteran chef and four new teams, the 2020 food fest was delicious, fun, and profitable. As our largest fundraiser of the year, the Foodie Throwdown raises funds that perpetuate preservation and programming for our organization. But it’s predicated on fun as much as on funds. Created as a way to encourage food enthusiasts to share their passion for and talent in the kitchen, the event has been popular for nine years.

• Dr. Rich Mitchell, assisted by his brother-in-law, Tom Bueckers. Winners of the main dish category, they featured knackwurst with german potato salad. The candied sausage on their maple cream cake was surprising and creative, not to mention tasty.

• The team representing the Austin Public School District, who called themselves “Not Your Average Lunch Ladies,” won the dessert category with a savory maple sausage bread pudding topped with maple sauce. Their main dish, ooey gooey five cheese sausage macaroni and cheese, was ooey and gooey and scrumptious.

• Veteran Wade Kolander served homemade sausage eggrolls with a choice of dipping sauces, spicy and sweet. His dessert, a sausage cake with espresso drizzle, was both unique and delicious!

• Finally, Austin native, now LaCrosse resident, Joel Morrison brought Schuby’s Neighborhood Butcher to town to compete for the first time. Their Vietnamese lemongrass sausage meatball paired with curried carrot puree added an international flair to the night. And they even cooked apricot bread pudding in a sausage casing and then topped it with a whiskey and caramel glaze. “They didn’t put sausage in the dessert…they put dessert in the sausage [casing]…” the team was proud to announce.

Did you guess the theme yet? “It All Started With Sausage” gave homage to a product that George Hormel credited with his company’s early success. Who knew sausage could be prepared in so many ways. Obviously, George did….

The Benefits of Music Therapy