Grab some coffee and enjoy the predawn show

In March, the action in the predawn sky really picks up. The month opens with Mars, Jupiter and Saturn forming a straight line, in that order from right to left, above the southeastern horizon. On the 4th, the three planets are spaced almost evenly apart. 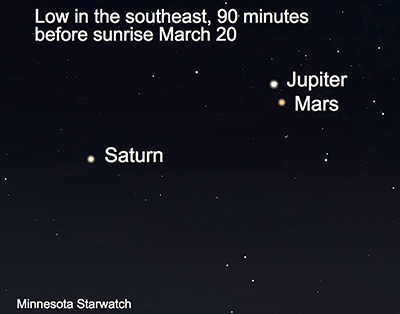 But that neat arrangement soon gives way as the planets switch positions. Jupiter and Saturn are about to leapfrog past Mars, and all because Mars, being the closest to the sun, orbits the fastest.

What’s happening is that Earth’s orbit is carrying us eastward and thus toward all these planets, making them move higher and westward. But Mars’s own orbit carries it much more rapidly eastward against the background of stars than the orbits of Jupiter and Saturn carry those planets.

As a result, Mars resists the westward movement imposed by Earth’s orbit and appears to sail eastward toward—and past—the two giant planets. Actually, though, Mars is mostly holding its own as Jupiter and Saturn sail past it on their westward journey.

Have a look on the 18th, when Jupiter and Mars make a close pair while a crescent moon hangs right below them. The next morning, Jupiter and Mars will be closer yet and the moon will now appear below Saturn. On the 20th, Jupiter passes a mere 0.7 degrees—slightly more than a moon width—above Mars. On the 31st, the ringed planet passes about a degree above the red planet. In April the new lineup will be, from right to left, Jupiter, Saturn and Mars, with the gap between Mars and the other two planets rapidly widening.

In the evening sky, a young moon comes out below Venus on the 26th and 27th. And don’t miss the show as the brilliant planet and the Pleiades star cluster approach each other in the last week of March. Mark your calendars for April 2nd and 3rd, when Venus glides, spectacularly, in front of the Pleiades. Be sure to have binoculars handy.

March’s full moon shines the night of the 9th. It will be big and bright, though more than six hours past full when it rises that evening.

Spring arrives with the vernal equinox at 10:50 p.m. on the 19th. At that moment the sun crosses the equator into the northern sky and Earth will be lighted from pole to pole.

Find U of M astronomers and links to the world of astronomy at http://www.astro.umn.edu