An overthinker’s guide to homebrewing

Perhaps one of my biggest overall flaws — aside from all the others, so settle down and put your hands down — is that I overthink things.

Now, some of you may be tempted, or maybe even asking your wife or husband, “then why isn’t he a famed philosopher?” Because, I don’t “think” think. I think on certain subjects over and over again. I think, therefore I am, which means I’m a bundle of nerves brought on by overthinking.

This has been an on/off thing since the very early years of my uncomfortable self, rearing its ugly head in my teenage years when I had the self confidence of, well, a teenager only doubled.

This has always been especially true when trying new things. Aside from my very young self of 46, who thoroughly enjoys getting a new toy, changing the familiar or stepping outside my very comfortable box is a nerve wracking thing that will also trigger said overthinking self. Visions of failure, mass failure or even epic failure are all too real things, brought on by experience.

Now, I suppose I could take this moment to give you an inspirational quote or meme about perseverance and making it to the other side of the mountain underneath the bright rays of the new day’s sun.

But this isn’t Facebook, this is a column that’s currently occupying the time it takes to drink your coffee on this particular Saturday morning.

Instead, this is the real world me with the optimism of gallows humor, fully expecting that whatever I’m about to try will explode everywhere and thus, I overthink things.

This is why I don’t try new things, because by the time I’m done overthinking a subject, I’m tired and ready for bed.

This has all become readily apparent as I take further steps into homebrewing, specifically honey mead — the drink of the ancient Norse.

This will be the first of several columns slowly reporting on this endeavor, which is absolutely brand new to me. I’ve written stories on homebrewing, plenty of them in fact, but never tried it myself.

Along the way you will read about the steps I took, the successes, and ALL of the failures I’m absolutely sure are laying on the horizon.

This won’t be a regular thing, because the time needed to brew this heavenly drink is lengthy. As you may remember from a previous column first announcing this project, I told you that I’m following a process that is mostly free from modern conveniences. This is largely following the process of those Norse from Northern Europe, so it’s involving very little in terms of process, but quite a bit in patience.

According to the book, “Make Mead Like a Viking” by Jereme Zimmerman, I will have a drink that’s passable almost right away, but to get a truly flavorful and interesting mead, this process will take anywhere between three months and a year or even longer, which will leave plenty of time for something to go wrong.

But, I’ve officially started the process by purchasing a few of the items I need: including my first bottle (one of many), a turkey baster (more important than it sounds), quart jar (for creating a bug or barm, a natural starter which will replace commercial yeast), a journal (so I can write how dreamy the mead is) and last but not least, honey (the true heart of this journey). 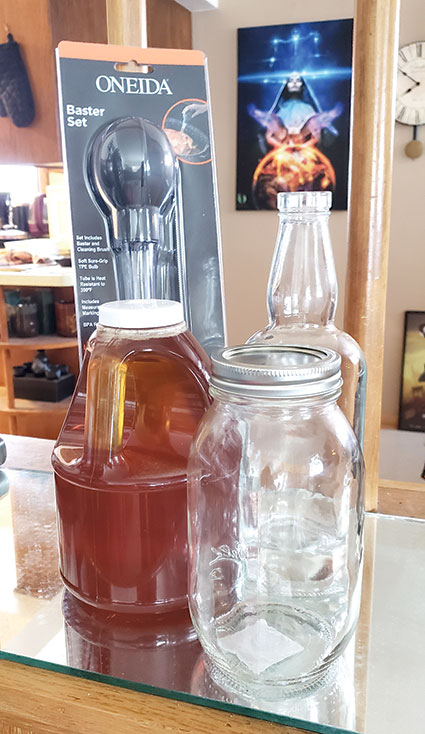 Yes, it’s a mild start to the process. Anybody who has homebrewed who may be reading this is hardly going to be impressed by this start, but I’m super excited.

Still, being excited doesn’t take away the overthinking as there is a whole host of things that I have envisioned going wrong.

Naturally, there is the fear of going through all of this only to have it fail, but on top of that there is the idea of exploding bottles and cat interference. I’m not entirely sure what cat hair will do for the final project, but in his book Zimmerman encourages experimentation and so we’ll consider this a forced experiment, because anybody who has cats will automatically know there is no place in your house that’s free of cat hair. In fact, I’m willing to bet you’ve looked at your current outfit and found a hair.

Either way, I will enjoy this process if it kills me, and along the way I hope you enjoy the process of me attempting natural chemistry.

Trust me, if you’re like my high school science teacher, you will also find this wildly entertaining.