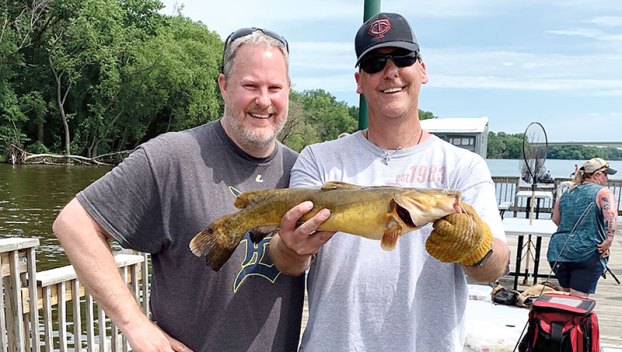 Alan, left, and Robert Rowbal on a fishing trip to LaCrosse, Wis. In 2018, Alan donated a kidney to Robert, who was suffering from Polycystic Kidney Disease. Photo provided

Brotherly Love: Austin man given the gift of a kidney by his brother

When Austin resident Robert Rowbal and his brother Alan were younger, they lost their mother to Polycystic Kidney Disease (PKD). Then, Robert found out he had the same disease, but he had a kidney donor in the form of Alan.

Because the disease, wherein cysts develop on the kidneys, is genetic, the two always figured they should get tested to see if they had the disease.

In 2001, he had the test done that revealed he did indeed have PKD. Despite his reservations, doctors really wanted Robert to have the tests done after hearing about his family history.

When he heard he had the disease, Robert was initially filled with doom and gloom. However, he ended up figuring that as a 30-year-old it would not start becoming an issue until his 60s.

One thing Robert wants people to know is that the disease does not automatically mean the end is near.

“It’s not a death sentence,” he said.

For about 17 years, Robert lived with the disease using medication and once a year check ups.

For most of that time, the disease did not affect how he lived his life and the goal for Robert and his doctors was to keep this managed throughout his life.

Then, for about three years before the transplant, his levels started increasing, but still it was not to the point where a transplant was imminently needed, Robert said.

Alan ended up never getting checked until three years ago, when it became apparent that Robert would need a donor. Like his brother, Alan was leery about finding out whether he had the disease.

Initially, Robert never told Alan he had the disease. He ended up learning about the disease five years ago when Robert’s wife mentioned it to his wife.

For Robert, there was not a reason to tell Alan about the disease at that time.

“Physically, I was fine,” Robert said.

Both brothers always felt that if one of them had the disease, the other would donate a kidney if it was possible.

With it being such a major thing though, as they got older, part of Alan hoped there would be another way.

“You want to help if you can, but part of you is looking for a relief,” he said.

Still, for Alan donating a kidney to Robert was all about making sure his brother would live to continue doing the things he loved and spending time with his loved ones.

“Once I found out I was a match, it’s just like, ‘Let’s just plow forward,’” Alan said.

In April 2018, the doctors said the procedure would need to be done within a month.

“That’s when it really scares you. It’s always been sometime in the future; well now it is now,” Robert said.

The latest date ended up being May 18, 19 days after the two learned it was needed.

Robert said he tried to be nonchalant when telling Alan, who lives in Michigan, that the surgery needed to happen soon. He said his brother was amazing to drop everything that he had planned and take off work in such short notice to come and donate a kidney to him.

One reason Alan would have liked more notice was because he heard being in good shape made the procedure go better. So, for that time, he worked out on the treadmill everyday. 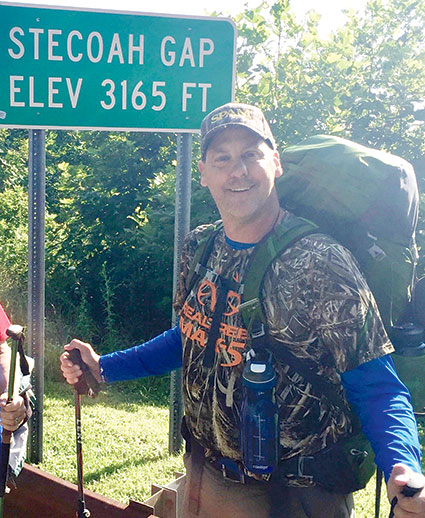 After taking the summer of 2018 off due to just having a new kidney transplanted into his body, Robert Rowbal got back to one of his favorite things to do this summer, hiking trails in the Appalachian Mountains. Photo provided

On May 18, 2018, surgeons took one of Alan’s kidneys out and put it into Robert, connecting it to his system while leaving his two originals in.

Robert could not describe in words how grateful he was for Alan to donate a kidney to him.

After a few days of recovery for each, they left the Mayo Clinic in Rochester.

Looking back, both recommend people take the test and find out if they have PKD if they have a family history of the disease.

“You should get checked as soon as possible,” Robert said.

While there is still no cure, there are drugs that can slow the progression of the disease, he said. Another factor to watch out for if someone has the disease is their blood pressure, which needs to be at at least a normal level.

Another thing to avoid with the disease is smoking, Robert said.

Although they couldn’t have done anything different if they were checked years ago, there are now steps that can be taken, Alan said.

Today, both brothers are doing well. After taking the summer after his surgery off, Robert was back to hiking this year and he and Alan also had a fishing trip in LaCrosse, Wisconsin this year.

More information about kidney transplants can be found at www.mayoclinic.org/tests-procedures/living-donor-transplant.

Minnesota’s presidential primary: Everything you need to know

House makes lynching a federal crime, 65 years after Till

‘Part of this country’: At Capitol, Minnesota welcomes newest citizens

Investigators work to determine cause of Alexandria fire

Satellite almost on empty gets new life after space docking

Best Bets: A weekend of the arts

Photos: Donation to help get K-9 Rudy a new vest