An Austin woman who allegedly left her 4-year-old son locked in a vehicle while she was working made her first appearance in Mower County District Court on Wednesday. 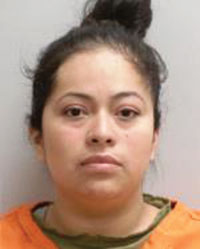 Liliana Garcia, 27, has been charged with gross misdemeanor child endangerment.

Austin Police Chief David McKichan said police responded to a call at about 2 p.m. on Monday after Hormel Foods employees noticed a child locked in a vehicle in the Hormel Foods plant parking lot.

Police made contact with the boy’s mother, Garcia, who had clocked in to work at 6:30 a.m. She told police she normally dropped him off at a babysitter and that she thought she had dropped him off that morning. She then wondered if she had at about 9:30 a.m. or 10 a.m. She mentioned it to a friend, but did not follow up with the babysitter.

McKichan said police believe the child was in the vehicle the whole time. The child was unharmed.

Garcia was arrested after police learned she had a warrant for failure to appear in court on a driving after revocation charge.

Garcia will appear in court again on Nov. 18.