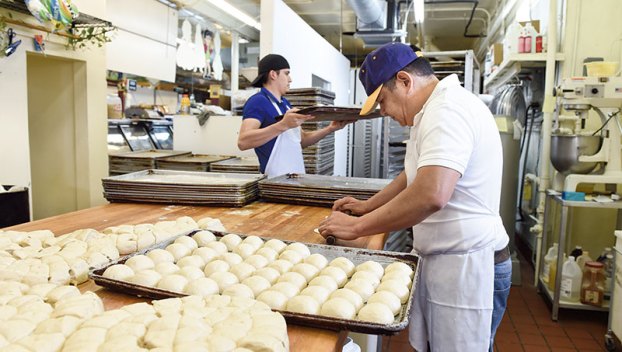 Baker José Torres was hard at work with two other employees in the back room of Alicia Bakery Thursday afternoon. They had already rolled out numerous balls of dough that would eventually be folded, kneaded and prepared for the oven to bake until a golden brown crust formed.

When asked if he had been busy all day, Torres shook his head and started chuckling to himself. That would be an understatement. There’s two types of bread that Torres makes during the week of Día de Los Muertos. One is the muñecos — bread that would resemble little people — and the other is the hojaldras, bread that’s decorated with designs that look like bones and is flavored with orange zest (Torres’ personal choice to include) and only available twice a year; once during January and the other time during the week of Día de Los Muertos.

“These types of bread are the most common and most well-known to be used for Día de Los Muertos,” he said. “It’s definitely the most traditional bread. I love the flavors used, and it makes it something for people to look forward to when the holidays come around.”

This year, Torres made over 2,000 loaves of muñecos and about 800 loaves of holjadras, which is Torres’ personal favorite because of the flavors and the extra steps used to create the beloved treat. However, his daughter Jessica Meza is partial to the muñecos.

“I’m in the minority,” Meza laughed. “My mom loves the holjadras, and my husband asked me to bring some of that bread back. I said no because I want the muñecos. I’ve been thinking about it all day at work.”

Though it is nearly impossible to estimate how many loaves of bread that Alicia Bakery has sold since it first opened its doors in 2003. Torres said that it is probably close to 32,000 loaves. Alicia Bakery has regular customers coming from all over, even from Wisconsin and Iowa, as the word of mouth the bakery creates reaches people from throughout the area.

“Customers who are new and are our regular customers, they look highly upon us making this bread,” Meza said. “This is something traditional and keeping our customs alive.” 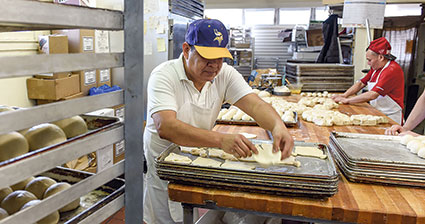 There were about 600 loaves of pan de muertos (bread of the dead) baked to commemorate Día de Los Muertos, or Day of the Dead, a Mexican tradition that is observed during late October into early November. The 600 loaves, however, is just for Austin High School.

This tradition had been in place for many years between Austin High School and Alicia Bakery, when the school would order about 500 loaves of pan de muerto from the bakery so that students in the Spanish 4 classes could buy a loaf of bread for about $0.75 discounted price from the usual dollar price from the bakery. It is then placed as an offering on a makeshift ofrenda or altar to directly observe DÍa de Los Muertos in person.

Each ofrenda is unique and specific to individual families and honors loved ones who are deceased. Depending on the closeness of the relationship of the loved one, various altars can look different. The altars are decorated with flowers, drinks and food that the family member loved, along with some photographs.

Sometimes, families who observe Día de Los Muertos will place a trail of orange cempasuchitl (Aztecan or Mexican marigolds) near the entrance to their home, so that the spirits who are paying a visit to their loved ones can find their path to the house guided by the vibrant colors of the flowers. 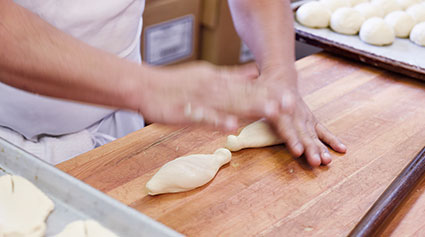 This type of hands-on learning has been a tradition for Austin’s Spanish classes for quite some time, said Spanish teacher Rhonda Alberts. When she started working at Austin Public Schools in 1995, observing Día de Los Muertos was already part of the curriculum. Her Spanish 4 class prepares to set the bread on the altar and learn about this practice and what it means to the various communities that live in Austin.

“We have been ordering the bread from Alicia Bakery for as long as I can remember,” Alberts added.

Alicia Bakery entered the relationship with the school in 2010, according to Meza, and her father has always cherished this type of relationship with the high school that took great care in honoring different cultures through these types of experiences. No matter how busy he gets during this time of year, he sets aside the time to bake loaves of bread to deliver directly to the school.

“He doesn’t ever do deliveries, most of the time customers would need to pick up pastries themselves,” Meza said. “He always felt honored whenever the high school would accommodate him, and he wanted to do the same for them.” 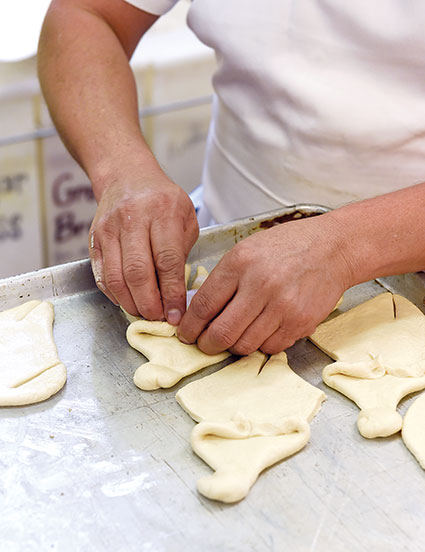 José Torres folds the arm on muñecos before putting them in the oven during a day of baking for Día de Los Muertos Thursday.

As a child, meza remembers how she would be tempted to “cheat” or to sneak a piece of the ofrenda from the altar. But, her parents had been stern from the beginning not to eat the dead’s offering, as it would be considered disrespectful to the spirits who traveled to visit their family.

“My parents told me that it was more of a respect thing,” Meza recalled. “They said that you must let the spirits have their fill of the bread first before you take any yourself. So, usually we would wait until the festivities were over, and then we could have some of the bread.”

Surprisingly, Día de Los Muertos isn’t the busiest time of year for Alicia Bakery. Since the holiday is more for individual families choosing to partake in remembering their loved ones and ancestors, it’s not as widespread of a cultural tradition, as some parts of Mexico may not even celebrate the tradition.

Torres used to celebrate Día de Los Muertos back home in Mexico, where there would be grand festivities and families would gather at a loved one’s grave site and adorn it with the various offerings that were placed on their altars. There’d be mariachis and other types of music playing, and the people would celebrate the lives of their loved ones in a big fashion.

“We’re not able to do that here,” Torres said. “My father died and is buried in Mexico, and we don’t have anyone buried here. But we still honor them.”

The Torres family will set up a simple ofrenda for their beloved family members and then enjoy a piece of bread. Though it may not seem like much to others, this is a time of celebration, reflection and remembering how family means everything.

“I want our community to know to not let our traditions die,” he said. “Show our new generation the meaning of Día de Los Muertos, and show them our traditions and customs. Let them learn so that they can live.”