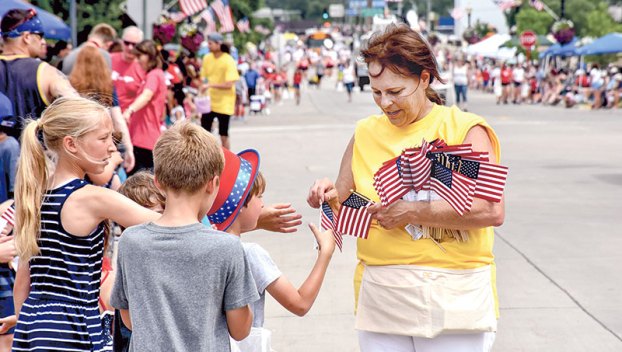 A River Rats Car Club member hands out American flags to children during the parade on July 4. Herald file photo

The Austin City Council approved a motion to move forward a vote on making the city the organizing entity for the 2020 Freedom Fest event during its regular work session Monday evening.

The Austin Chamber of Commerce Board of Directors voted in September to no longer have the Chamber plan the event as in previous years. The Board’s decision came as a result of the Chamber’s “limited staff and a declining volunteer base,” Chamber President Elaine Hansen said in a previous story.

According to a letter from City Clerk Ann Kasel, “The City has looked for partners for the festival but no groups have stepped forward yet…” Mayor Tom Stiehm has proposed the city plan the event with Kasel serving as coordinator.

The Jaycees will be invited to have their beer garden while veteran’s groups will be allowed to have Bingo games in the pavilion at Bandshell Park; however, no other activities in the park will be sponsored by the city.

The Chamber of Commerce will continue to organize the annual Fourth of July parade.

The current city funding for the proposed format is budgeted at $10,000.

Administrative Services Director Tom Dankert also proposed a budget of $30,000 for the 2020 fireworks display, which will be held for one night instead of two, unless the council votes otherwise. Dankert has been working on a contract with Flashing Thunder Fireworks, which he said must be signed by December to reserve the city’s spot.

Dankert said that funding from the city, Hormel Foundation and a few major businesses will be all that is needed.

It was made clear during the discussion that the 2020 Freedom Fest will be a test run; the council did not commit the city to organizing the event beyond 2020.

The council will officially vote on organizing the 2020 Freedom Fest event during its next regular meeting on Monday, Dec. 2.