A rendering of a NuTek Bioscience building that could potentially be built in Austin. Image provided

NuTek, an industrial ingredient provider of plant-based drug fermentation protein (peptones) used in the development and manufacturing of pharmaceuticals, approached the city about a year ago with the proposed building.

“It’s exciting we have interest from a project that would be a sizable addition to our Creekside Business Park,” said City Administrator Craig Clark.

The proposed project has the potential to bring 35 jobs to Austin with wages averaging $22 to $32 an hour.

“Those are the kind of jobs we’re looking for to be filled within the community and add that wage dynamic to the community,” Clark said. “The auxiliary benefits of the wages they’ll be paying is they will attract employees. It’s a good thing to try to lift wages in the community because it has spin-off benefits for buying a house, buying services, retail and all of those other components.”

The building is estimated to cost between $8 million and $10 million with buildouts costing an additional $15 million. The structure of NuTek’s financing plan depends on securing investors for the project to fund their share of the proposed construction cost (20 percent) as well as equipment and other buildout components.

On the city’s end, the structure of the incentive package would have the Port Authority coordinating much of the project, but also depends on the council’s support of the Port Authority’s approval of the Tax Increment Financing (TIF) as well as issuing the bonds for the construction of the facility representing 80 percent of the construction cost. The TIF would be valued at an estimated $928,800 over nine years while the bonds issued would be anywhere from $6.4 million to $8 million. 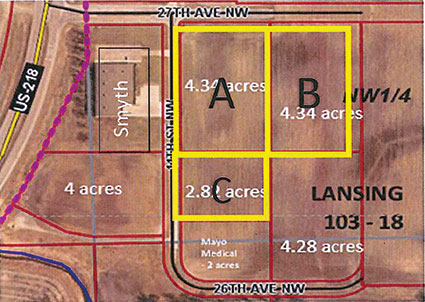 “We’re working in earnest to bring the structure of the deal forward, but they still have to work with other folks to get the investors in place to take it to the next step,” Clark said. “We want to get ready and get the council’s commitment on a generalized structure and then work back with (NuTek) as they work to get their investors in place and be able to carry it forward with other approvals by the council. (NuTek is) looking at other locations, so we’re trying to be competitive to attract them here. We’re focused on doing more of a design-build incentive where we would bond through that working through the Port Authority as the landowner and building owner. We would lease it back to NuTek and bring those jobs and that development here.”

Clark stated that part of NuTek’s business model is to “ramp up companies and sell them off.” Should that happen, the standards would have to be ironed out in the structure of the development agreement.

“They’ve been transparent about that’s what they’re looking at here,” Clark said. “That doesn’t mean the business or jobs would leave the community; it would just be a new owner. We want to be able to provide for that, but they also can’t just sell it to anybody. They would have to meet the same standards as NuTek would be. Those kind of specifics would have to be worked out in the development agreement.”

“We’re excited to move forward with them on the project and hopefully bring it to a reality,” he added. “We’re not necessarily at the finish line, but we’re optimistic we’ll be able to get there. They were really clear about wanting to know that the community wants to warmly receive them. That was clearly the direction from council; they have nothing but green lights to proceed forward.”