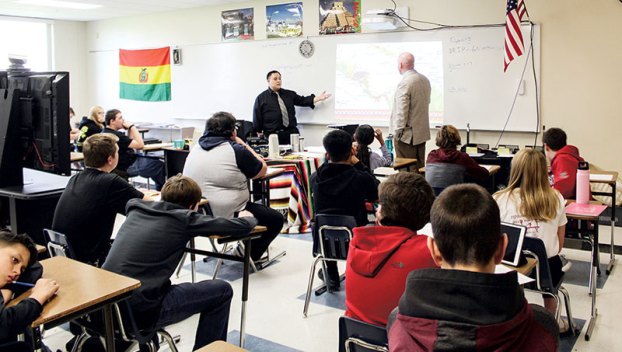 LYLE— The school is often considered the center of the town, and the community of Lyle may face dire effects if the Nov. 5 operating referendum fails to pass.

Inside of Lyle Public School Thursday morning, Superintendent Byran Boysen walked around the school with students as they transitioned from one classroom to another. Boysen greeted individual students by name, and most responded with a grin and even a hug every now and then.

“We’re really like a family here,” Boysen said. “Everyone knows everyone around here.”

Lyle Public School is a place where many of the students are open enrolled, and serve a wide array of communities from the surrounding area. They’re part of the Southern Minnesota Education Consortium (SMEC), and they have state-winning athletic programs through a cooperative with Pacelli Catholic Schools in Austin.

A school of only 315 students from Pre-K through 12th grade, many of the students who attend Lyle were open enrolled. Parents who desired smaller classroom sizes (Lyle averages 20 to 21 students per class) and hands-on learning experiences, often send their children to Lyle from other surrounding communities.

From a community standpoint, much of the building’s usage also contributes to the town as a whole as its largest employer. It also serves surrounding towns as a safe shelter during inclement weather and other emergencies. The library serves individuals, and allows guests to check-out books. If there wasn’t a book on the shelves, then the library could contact SELCO and find the literature through its network of libraries in the region.

If someone wanted to rent out the gymnasium or multi-purpose room for anniversaries, birthday parties and other types of celebrations, then Lyle school is there for them to use. If the weather got too cold, and there were people who insisted on continuing their fitness routine by walking, then the school opens its doors so that walks could take place up and down the hallways that were adorned with school memorabilia.

This place was more than just a school, it was the heartbeat of the community, and many here are tight-knit.

“We are a beacon for this community,” Boysen said. “Without the school, what will happen to the community?” 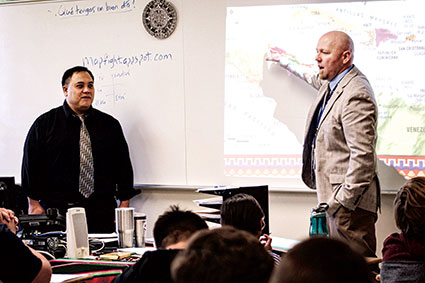 That’s the daunting question that the school  and community needs to think about as Nov. 5 draws closer. Soon, voters will be asked a question on the ballot box that would increase funding for Lyle in order to sustain its programming should it pass.

Lyle is asking voters to say “yes” to increasing its operating referendum authority to $850 per student, which expires after 10 years and is subjected to annual inflationary adjustments determined by the state. The last time the school district asked for an increase was in the late 90s and was set at $840.01 per student. Voters approved to renew that same amount in 2011.

The operating referendum allows districts to generate additional general education revenue, which has not kept up with the pace of inflation since 2002-03. Revenue is generated through a combination of state aid and local property tax levies, and can be used for any operating or capital expenses such as staff salaries and benefits, utilities, supplies and technology. This is not to be confused with a bond referendum, which goes toward building projects.

With the funding not keeping pace, many districts are left filling their financial needs through budget cuts or increasing referendum revenue; and most have done both. For rural schools especially, obtaining additional funds have become a desperate situation.

“What we’re seeing is that more districts operate on a voter-approved levy,” Boysen said. “Actually, 100 percent of districts around Minnesota are running on some sort of levy to meet their funding needs.”

If the Nov. 5 operating referendum fails to be approved by taxpayers, then Boysen has no choice but to visit the Lyle School Board and prioritize what can be spared and what needs to go. That could be from anything from staffing to eliminating programs.

On an extreme level, if Lyle lost more funding and had to close, then the community would see decreased property values and families would need to spend more money sending their children to other school districts to receive their education.

During the last few months, Boysen has been hosting conversations with various community members who were uncertain about their stance on the referendum. Some were skeptical about approving the referendum when they had no children attending school, and questioned the relevance of them voting “yes.”

To the superintendent, there was no doubt on why the community needed to come together and support their school.

“When they ask ‘Mr. Boysen, why should I vote yes?’ I tell them this,” he recalled. “It’s an investment in our children … this community is very special. Everybody chips in to help out. This is a great place, and this is about sustaining what we have. This school is our future.”