A path of numbers and service: Wealth Management Solutions’… 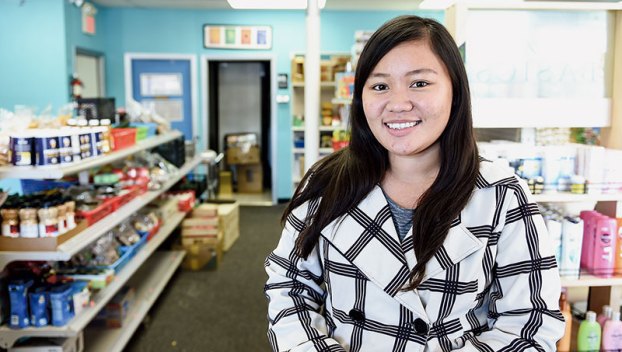 Austere Htoo Apolo, owner of K’Nyaw Grocery Store, is taking part in a family dream to own her own business. Eric Johnson/photodesk@austindailyherald.com

Inside the K’Nyaw Grocery Store, those looking to find a wealth of ingredients to recreate some of their homemade food can find it there.

Since 2017, the specialty food store carries loads of produce (both fresh and frozen) that come from different Asian courtiers and states like California. There were often popular requests made from customers searching for frozen Betel nuts, otherwise known as areca nuts, used in tobacco or treatment for various health disorders.

For Austere Htoo Apolo, owner of K’Nyaw, this was the type of business that her family had always dreamed of owning, and helping members of the community find what they need brings her an immense sense of accomplishment.

The path to owning her own grocery store wasn’t perfectly linear, but it was clear that fate intended for Apolo to achieve her dreams.

A family friend sought to sell their grocery store in Austin that was previously called the Lighthouse and was located inside the former Plunkett Law building. The family decided to purchase the inventory and assets, and the store reopened under the name K’Nyaw Grocery Store.

For those looking for fresh and frozen ingredients to make different Asian dishes, those types of items can be hard to come by in rural areas. Often times, people would need to travel closer to the metro areas where there were more diverse populations and businesses.

However, having never run a business before, Apolo had to learn the challenges that came with being a business owner quickly. The realities of operating a grocery store with no prior experience became apparent, and the first year of ownership was extremely difficult.

“We kind of got ourselves into a big mess because we have not had any business experience,” she remarked. “Learning everything at once was difficult, especially for the first year. But the rewarding part is when we hear customers say they do not have to travel far to get their products. A majority of our customers would have to go to Rochester, Owatonna or even St. Paul if we do not carry the food they eat regularly.”

More hardships came when the Plunkett building was slated for demolition, and without a clear vision of where they would go, the future seemed dire for the family and their livelihood.

Plus, with Apolo’s father in poor health, he could not go to work at Hormel Foods or Quality Pork Processors for manufacturing jobs.

However, through the help of local leadership, Apolo and her family were able to find another place to relocate by April 2019.  They reopened their store again in late August 2019 at its current location of 404 First St. NW and held a grand opening in September to wide success.

Apolo was able to keep the family store running,and her father could take it easy. But, K’Nyaw Grocery Store was more than just something that pulled in income for her family it was also a lifeline to maintain the quality of health for her father and possibly future employees.

“This allows him to sit when he needs it, and ensure the care of his health,” she said. “We envision growing our store slowly and employ other people going through similar situations my dad went through.”

The Apolos went through atrocities that many others would never dare to imagine. They came to the United States in 2013 after living in a refugee camp in Thailand, during a time when Myanmar (Burma) was going through a civil war.

After finding refuge and immigrating to Minnesota, they lived in Worthington before settling down in Austin. They rebuilt their lives after having so much taken away from them. For them to be able to own their own business represented the journey Apolo’s family embarked on after having to leave their home country.

Ownership of the grocery store taught Apolo many things, such as talk to those who were experienced veterans in the business that a person is trying to pursue, check the pros and cons and make sure there are back-up options. But most importantly, don’t give up even if you don’t get any profit for the first couple of years.

Despite the strife that they experienced, the family was able to make their dreams come true and start over.

“Our family always wanted to have our own store,” Apolo said. “Having an Asian food store allow us to serve our community by providing fresh vegetables and package items that they may not be able to purchase in the local markets. Having our own business also gave us the sense of ownership and belonging.”