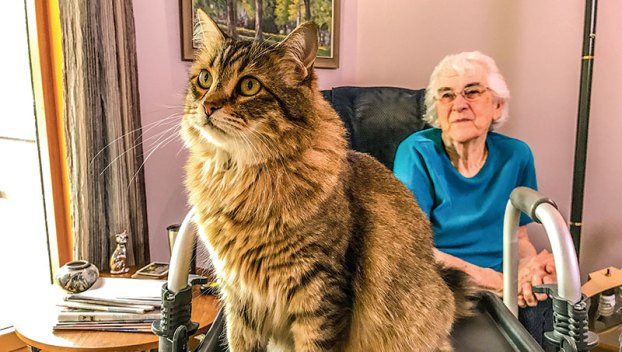 Cats and dogs can help seniors living at home fend off the feeling of isolation. Photos provided

Combating isolation: Having companions can help aging population to improve their quality of life

Whether it’s a simple get-together or a planned event for friends and family, spending time with a loved one can be a lifeline for those who may start isolating themselves from others.

Maintaining independence when aging can be a challenge for some. Loved ones may have moved away and don’t have the capability to help with daily tasks. For those wanting to stay home and grow old without the need for an assisted living center, that desire for independence can cause potential loneliness and isolation.

Home Instead Community Services Manager Karen Hanson has seen firsthand what isolation can do to the people who are going through their last phases of life. At Home Instead, the mission of enhancing the lives of aging adults and those who care for them also means providing hope by providing opportunities for developing friendships and connections with employees.

“Their presence is of huge importance,” Hanson said. “For someone who lost their spouse or family is far away, having something there that shows them unconditional love gives them a sense of purpose. It helps them feel valued when they’re losing things in life.” 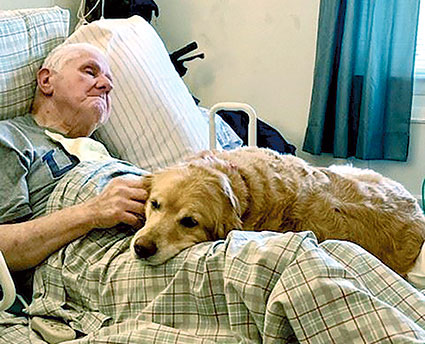 “For someone who lost their spouse or family is far away, having something there that shows them unconditional love gives them a sense of purpose. It helps them feel valued when they’re losing things in life.”  – Karen Hanson, Home Instead Community Services

Through Home Instead, there are 10 employees who work within Mower County and provide companionship for someone who may not have a loved one nearby to help them with daily tasks as well as establishing routines. By providing care at home, there’s a segment of the aging population that’s being served. While some may be living at an assisted living center, many want to stay within their homes and maintain independence through the help of senior home care.

The Home Care Association of America reported that nearly 70 percent of Americans who reach the age of 65 will be unable to care for themselves at some point without assistance. Those who are facing life’s natural progression as they age may end up isolating themselves if there are no means of making social connections with others.

This type of loneliness is very common, as one in three seniors reported that they had feelings of isolation, according to the National Poll on Healthy Aging that was conducted by the University of Michigan.

In this study sponsored by the AARP, researchers surveyed around 2,000 Americans between the ages of 50 to 80. More than a third of seniors in the poll said they felt they didn’t have companionship in some of the time, and 27 percent said they sometimes or often felt isolated. Nearly 30 percent said they socialized with friends, family or neighbors once a week or less.

The AARP also shared that three in 10 adults report lacking companionship, feeling left out or have feelings of isolation from others. However, the AARP also shared that experiences with social isolation are more prevalent in younger adults than older ones surveyed, with most adults (94 percent) surveyed age 50 or older, said they had someone they can call for help day or night if needed, but lower-income and minority respondents were less likely to say they had that kind of support.

From those who felt socially isolated, 28 percent reported to be in fair or poor physical health in comparison to the 13 percent of the aging population who didn’t feel isolated, according to TIME. Additionally, 17 percent of people who called themselves socially isolated described their mental health as fair or poor, compared to only two percent who said they rarely felt isolated.

Before someone decides whether aging in place is right for them, making sure communication happens between family members and their loved ones ensures that the individual feels respected, as well as having a better grasp on what unique needs have to be met. 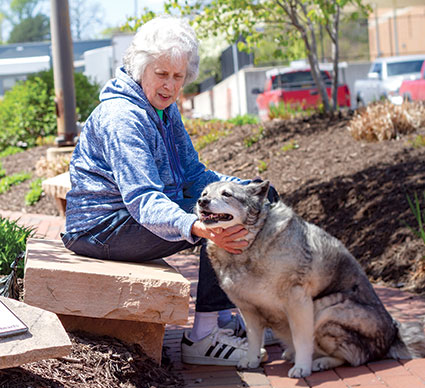 Pets can add a sense of being valued for those who are facing life alone.

Within Mower County, Hanson stated that she has seen about “half and half” when it came to whether someone had a human or pet companion helps with their loneliness. Regardless if it’s a person or an animal, the feeling of being valued is universal.

“Everyone wants to be loved,” she said. “When they’re feeling alone, (these people or pets) are their lifeline for them. It’s really amazing watching them give that additional support. When you find your sense of purpose when this part of life you’re losing things, it does give you that sense of companionship that’s desperately needed.”

Someone who can provide at-home care for their loved one and assist with daily tasks, or a pet companion that’s unconditionally loving their owner, are just a couple of resources that can help aging in place, as well as combat isolating behaviors and thoughts.

“It’s really amazing to see whether it’s a volunteer from the organization, or a pet, the improvement is very apparent since they’re getting extra attention,” she said. “It makes them feel like they’re not forgotten about. For family who moved far away and aren’t able to communicate as often, has an additional set of eyes that make sure their loved ones are cared for.”