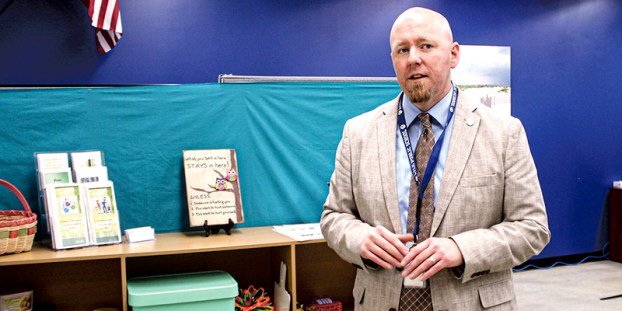 Lyle Superintendent Bryan Boysen stands inside the IMS office at the school. Here, students who need additional support from trained mental health specialists can meet with them. Hannah Yang/hannah.yang@austindailyherald.com

Building a Base: County agencies look to provide more support for improving mental health in students

As today’s students faces challenges and stresses that prior generations never encountered, schools and county agencies have been changing the way they approach and talk about mental health.

That was the case for Lyle Public School Superintendent Bryan Boysen, who from the start wanted to prioritize supporting students and staff who may be struggling with emotional or mental health issues. Having a background in mental health and law enforcement, he knew that schools are doing more now than ever to help students feel safe.

For some students who don’t know what to do with the emotions they’re feeling, it may lead to disruptive behaviors in the classroom.

“We tell our staff that whenever their students are acting out, there’s usually something else going on,” Boysen said. “We need to address mental health for our students, as well as physical health. They cannot do one thing if there’s something else that’s not being met. We want our students to have fond memories when they go to school.”

There were several things that Lyle did to address those needs. A “movement room” was created where students could release pent up energy instead of releasing it during class and causing a disruption. There were colorful handprints and footprints, instructions on where to jump or crawl, as well as padding. Anyone could use the room, regardless if they had specific needs or not.

Boysen also hired a new social worker for the district this year, who works directly with students who may need someone to share their worries. Lyle also works with Fernbrook Family Center and Independent Management Services, who have certified therapists who visit the school and meet with students in a private space where they can divulge some of their burdens.

“It’s really about empowering our students,” Boysen said. “There are high stakes and the end goal is to help them succeed and prepare them for life beyond school.” 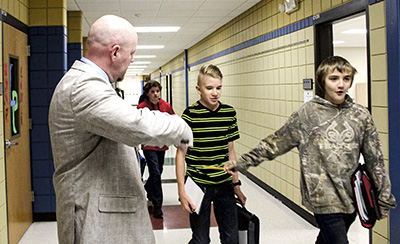 Lyle Superintendent Bryan Boysen interacts with students as they transition between classes. He and the staff at Lyle School have memorized each student’s name and makes the effort in interacting with them every day, and establishing personal relationships.
Hannah Yang/hannah.yang@austindailyherald.com

From student responses, fewer students felt engaged in school and believed that their school provided a supportive place for learning, reported good health or felt secure.

More Minnesota students reported having long-term mental health, behavioral or emotional problems, which was up from 18 percent of students surveyed in 2016 to 23 percent in 2019.

High school female juniors who reported having long-term mental health, behavioral or emotional problems more than doubled from 2013 to 2019. Within this year’s survey, the juniors who reported missing a full or partial day of school in the last 30 days, 24 percent said that they missed school because they felt “very sad, hopeless, anxious, stressed or angry.”

Data from the survey showed a strong correlation between students’ beliefs that others care about them and whether they ever had suicidal ideation. The survey responses showed that freshmen who reported having long-term mental health problems are nearly five times as likely as others to seriously consider suicide. Those who say their teachers or other adults at school care very much about them, 35 percent said they’ve considered suicide.

This was a stark difference from the 72 percent of students who considered suicide when they felt that their teachers don’t care at all about them.

There was also a decrease in the number of students who reported to be in excellent or very good health. However, there were fewer teens taking part in risky behaviors, but reporting at higher rates of having long-term mental health or emotional problems.

As society changed, there were also different things that students deal with, such as social media and other methods of technology, that could affect their emotional and mental health. Though it may not be a specific factor contributing to the increase in reports, it could also mean that more were comfortable coming forward to receive help.

“Back in the day, if there was something that happened in school, you could leave and not think about,” Boysen said. “Now, social media and technology is everywhere and they don’t get away from it. It sticks with them. But, we’re talking a lot more openly now than we did back when I was in school.”

For Lyle, the school’s implementation of addressing mental health and approaching discipline differently has had positive effects on the overall decline of office referrals and increase in overall attendance record for the school.

Last year, Middle School/High School Principal Jamie Goebel saw an average of 31 students per month based on referrals for disruptive or negative behaviors.

Goebel displayed the data on a bulletin board for all students to see as they walked to class. On the board, it tracked the progress of student office referrals as well as attendance record.

“That’s an amazing thing,” Goebel said. “We post this data out on the bulletin board so that students can see what they accomplished from their hard work and from making the right choices. Students know their boundaries and they make mistakes too. We want them to know that we got their back. If they don’t understand that, then I didn’t do my job.”

Lyle was one example of how schools change there approach in tackling mental health and emotional/behavioral problems students may be experiencing in the classroom. Yet, the need continues to show itself in overwhelming numbers.

Gerard Outpatient Services senior therapist Matthew Tallmadge has been serving the students over at Austin Public Schools who expressed their need for help in addressing mental health and emotional wellbeing. His schedule is almost completely booked, and that’s just with students too. Outpatient Services said that among the schools within APS, the middle school-aged students at IJ Holton Intermediate School and Ellis Middle School saw a higher need for mental health services.

When looking at the number of students being helped by Gerard Outpatient Services, clinicians saw an average of more than 100 students during the 2017-18 school year. Just within October 2019, Gerard had received 18 total new referrals from Austin Public Schools.

Four clinicians (including Tallmadge) visit the school districts for several days out of the week to meet with students who need mental health therapists. The number of students needing that support has been numerous, with Tallmadge estimating that he saw between “20 to 25 students a week” and between five or six students daily. That’s not including the other patients the therapists meet with outside of school.

“It makes sense,” Tallmadge said. “That’s the time of their life where expectations get higher and school gets more difficult. They’re developmentally changing and going through puberty. They’re experiencing changes inside and outside that can affect how they feel and think about how they can best address those feelings.”

Even though it’s hard to say what’s contributing to the increase in the number of referrals that mental health care providers are experiencing, it could also mean that more people were comfortable enough to come and seek help.

Outpatient Services Director Julie Peters said it was also important to realize that most children don’t want to behave inappropriately, citing that there have been studies done where punishment does not work in curbing disruptive emotional behaviors. Rather, the dialogue schools have been using to address disruptive behavior has helped decrease discipline.

“Some schools have been ahead of the curve,” Peters said. “As far as size, Mower County has been standing out as a leader for being proactive. The community here has been very supportive in providing help to those who need it.”

Since the MSS only comes out every three years, it was important to acknowledge that schools and other agencies have been doing continual work to improve support for students and staff. While the survey may be a good benchmark to see how students are doing, it wouldn’t be the best marker for the progress that’s being made, said Corey Haugen, director of research evaluation and assessment for APS.

“It’s more like autopsy data, and doesn’t give you all the pieces to complete the full picture,” Haugen said. “It doesn’t see what school districts have already been doing during the last several years to improve its methods of addressing mental health.”

Executive Director of Educational Services John Alberts also agreed, noting that the conversation on better methods to improve addressing emotional and behavioral problems students may have. However, it would take multiple different entities to completely address the issue, rather than just through the efforts of the schools.

“A lot of things happen outside of the classroom,” Alberts said. “There could be a whole host of things. It’s not something that schools have suddenly just started realizing that it needed to be addressed. There are things that public schools cannot address alone, and if we want our kids to succeed, there are other things that intersect where more folks are included on the conversation.”

As Boysen walked around the hallways, he encountered several students on their way to class. He greeted them by name, and even pulled one student aside to invite him to have lunch together. Goebel and Boysen would joke around with teens and check in on staff in the classrooms.

There was a closeness that the school community felt. They knew each other by name, and establishing that personal contact with each person, they were more aware of how someone might be doing. That sort of connection could help someone down the road.

“Staff knows what to watch for in order for their students to be doing well behaviorally,” Goebel said. “For us in schools, we need to step up and and be more cognizant of what’s happening to our kids. We can be doing more, but the best thing is to connect with your students.”