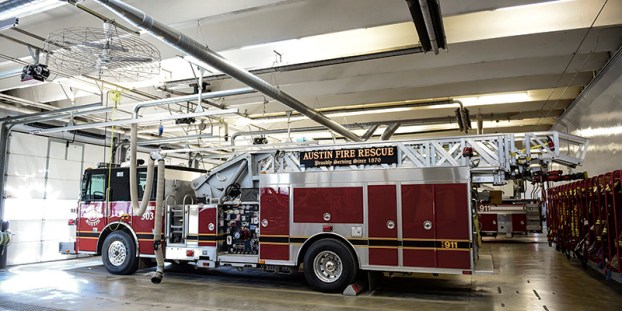 The Austin Fire Deparment is looking to the future as it’s faced with updating its facility. Eric Johnson/photodesk@austindailyherald.com

Austin’s fire station was built in 1981 and was meant to last for 50 years. But while the building still serves its necessary function, changing technology, staffing and time have Austin Fire Chief Jim McCoy looking to the future.

“Over the last few years we’ve put a lot of work into the station,” he told the Herald. “We’ve done a lot of maintenance items throughout the years to help prolong the life of (the station).”

According to McCoy, the station was designed to hold the all-career staff at that time. Since then, the city has transitioned to a combination department of part-time and full-time staff. Today, the AFD has nine full-time staff that live at the station 24-hours a day.

“It started with repair work to the exterior of the building, which was literally crumbling and falling apart,” McCoy said of the work firefighters have done on the station. “In order to stop that from happening, we had to put a new roof on. We repaired the exterior walls and put new windows in. Underneath the old windows we found that there was water infiltration and crumbling. Today, we don’t have any water infiltration. We’re maintaining the exterior of the building; if we find a trouble spot, we get it repaired right away.” 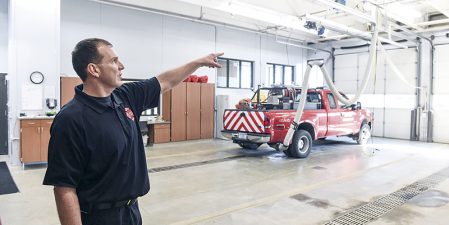 Austin Fire Chief Jim McCoy points to the ceiling of the current station. Future trucks added to the current fleet may become too big to fit in the current building.

In the living quarters, firefighters remodeled the kitchen and training room. They also cleaned and repainted the walls in the apparatus bay, where the engines are kept.

On the south side of the apparatus bay is a mezzanine area with a washer and drier that allows firefighters to wash their gear without bringing it in to the living area.

“Most of the stuff inside your house today is oil based,” McCoy said. “There are lots of carcinogens, even in the fire retardants they put in mattresses. When you come out of a structure fire, you’re covered with those. We do decontamination on scene and put all of our stuff in the back of a pick up truck and bring it back here. We don’t want those carcinogens from the last fire rubbing up against you. 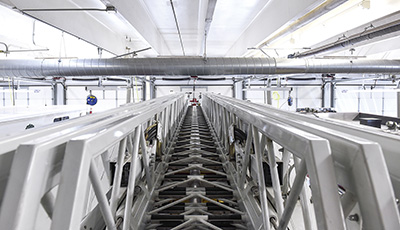 This view from atop the Austin Fire Department’s aerial truck shows how tight the fit is for current vehicles. Eric Johnson/photodesk@austindailyherald.com

“In an ideal world, the shower would be right off the apparatus bay,” McCoy said.  “That’s how serious this is. We have to take care of our firefighters; we don’t need anyone here getting cancer.”

Another challenge facing the fire station is the apparatus bay itself. The bay doors are 12 feet tall, a height that is problematic with newer models of fire engines.

“Years ago, when this station was built, the trucks were a lot smaller than they are today,” McCoy said. “Trucks are becoming taller and bigger; it is not necessarily a good thing, it’s just where the industry is going right now.”

McCoy’s main concern is the AFD’s ladder truck, which was purchased in 1993. With the recommended use cycle of 25 years, a new ladder truck will be necessary despite how well the AFD keeps up the current ladder truck.

“Trucks are getting bigger and bigger, and while working with the manufacturer of the engine that we just purchased last year, we told them we’re due for a new ladder truck and asked how we could get it through a 12-foot door,” McCoy said, noting the current ladder truck was modified to stand 11’ 4” to get into the station. “A rear-mount ladder is not going to happen. They just don’t make them under 12 feet, and the design of the station does not allow us to raise the roof for a taller ladder truck to get into the station.”

The height concern aside, the purchasing of a new ladder truck also brings the inevitable expense. 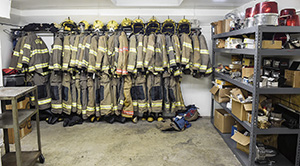 Austin firefighters now have a dedicatd area for spare gear they can pick up as their other gear is being washed and dried. Eric Johnson/photodesk@austindailyherald.com

“There are other options other than a rear-mounted ladder, but the mid-mount-style truck are more expensive and it’s always a give and take when you purchase an apparatus,” McCoy said. “Right now, the platform of the truck hangs out the front. With a mid-mount aerial, that basket hangs out on the back of the truck, so you end up with a lot of tail swing. With tail-swing, you can end up taking out traffic next to you. There is mid-mount apparatus that puts everything within the same footprint, but right now it’s $350,000 more than replacing the current style of truck we have now.”

McCoy added that the newest truck purchased by the AFD was priced at $517,000, and that apparatus manufacturers have an annual price increase of 3-5 percent. Fortunately, the Austin City Council was able to sign an agreement that allowed for the AFD to trade in the old truck and pay early, allowing for them to earn interest toward the purchase. The agreement also included the stipulation that the price would not increase.

Another issue with the apparatus bay is that it is not drive through, requiring firefighters to back engines through the doors.

“As with everything, backing up is an opportunity for accidents,” McCoy said. “There have been cases (at other departments) where someone gets backed into and killed or injured, even though they are doing everything right. If you can go forward, you want to go forward. Drive-thru stations are safer; we back in half-a-dozen times a day, sometimes more. Backing the trucks in, you’re opening yourself up for an incident.”

But despite the issues with the current station, McCoy said it still serves its purpose and credits the Austin firefighters with being willing to adapt to changes when necessary.

“It’s a good station,” he said. “It was built well, it’s serving us well right now, and really the station needs (discussed) are for the future.”