He was standing in front of a school in North Korea, where young children were leaving for the day. Scanning the young children, he knew their futures were limited to hard rural life with little or no opportunity to leave.

In North Korea, rural children are taken from their mothers and raised by party members and educated. Then, they return to the farm where live out their lives. Girls are expected to have babies and work the farm; husbands will most likely work in the city and then come home to the farm at night. 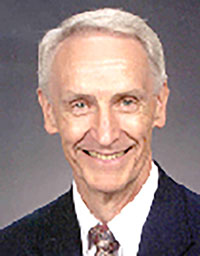 “How many Nobel Peace Prize winners, how many world-class violinists are we missing out on simply because they don’t have the opportunities that education provides” — C. Jerry Nelson

“How many Nobel Peace Prize winners, how many world-class violinists are we missing out on simply because they don’t have the opportunities that education provides” as it does in the U.S., he said.

Nelson, who spoke at the Riverland Community College Ag Summit on Tuesday, has spent many years addressing farm issues in Asian and African countries. Nelson was one of four speakers for the summit, held at the Holiday Inn Conference Center.

Nelson, a native of rural Lyle and Riverland alum, is professor emeritus at the University of Missouri, where he taught plant science.

He found retirement a time to provide help to those less fortunate.

He said he discovered that many countries have the same problems as any, but “solutions are not always clear.” He has spent time in several countries, including South Korea, Vietnam and Ghana.

His time in North Korea may have been the most telling, he noted.

While marketing products is hard in some counties, North Korea has few problems, he said.

“That’s because government takes it all and distributes it,” he said. “And while the capital city of Pyongyang has had tremendous growth, “that’s not the way it is in the country at all,” he said.

Self-sufficiency cannot be learned, since the farms are collective, mostly crop farmed on the county’s plains.

“There is little mechanization,” despite some equipment seen in the country.

He was told, for instance that one of the six-acre farms had 39 tractors – not a bad proportion he said. Then, someone else from the group asked how many actually worked. He was told out of the 39, half of them could be driven; during a subsequent visit, there were only four that were able to be driven. “There are no mechanics,” he said, adding that that’s why 90 percent of the country’s rice is hand-transplanted.

Crops include rice, corn, wheat and potatoes in a good year. In the 1990s, he said, famine resulted in the loss of 10 percent of the country’s population. He showed slides of barren hillsides, stripped clean of trees: Farmers had literally chewed the bark in an effort to ingest anything they could when hunger overtook them.

There was no system to either drain or provide water, or allow the farmers to install good ag and conservation practices.

“They are afraid to take any land out of production, to implement any changes,” since that would delay food.

Lack of natural gas results in North Koreans using corn stalks “or old shoes, or anything else they can use” whose fumes are converted and used a “syngas.” While inefficient and slow, it still remains the only way the trucks can travel, he said.

“And how do you get food to market like that?” Nelson said.

The country has faced a combination of problems, the least of which is leader Kim Jong-un’s tenure, which has found fewer strides being made in farming.

There have been highlights, including a trip to the U.S. taken by North Korea ag officials that focused on soil science and reforestation – a great first step, said Nelson.

“But then came the election (of President Donald Trump) and everything stopped,” Nelson said.

Despite those things, he said, there is hope that he and others can find more ways to help.

“We (in the U.S.) need to innovate … to help in places like North Korea. It is time to take our knowledge and see what we can do to help a broader range of people,” Nelson said.