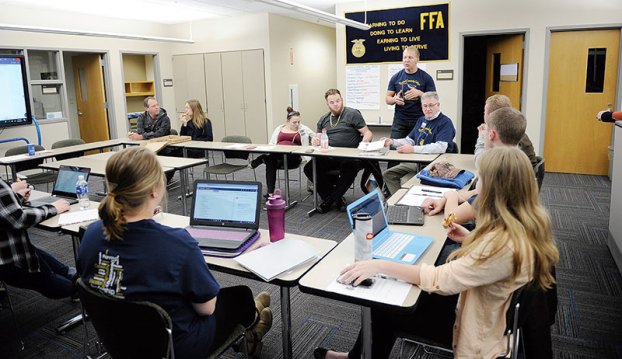 The establishment of Riverland Community College’s Ag and Food Science Technology Club has opened a field of opportunities to not only collegiate fans of agriculture, but high school FFA members as well.

There are 37 members of the club that includes high school FFAers from Austin High School.

It is not a prerequisite at the high school level; of that club’s 20 or so members, about eight are part of the Riverland group. 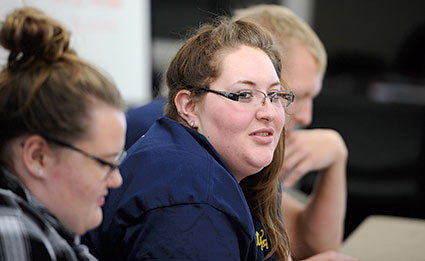 It is a rare collaboration. While there are some colleges in the state that offer a collegiate level ag club, it is the only one that offers that kind of collaboration between the two education levels, said adviser Nick Schiltz.

The idea was generated by now-president Kayline Schechinger, but she is quick to say she won’t take all the credit. A fellow student “kind of spontaneously mentioned the idea” of establishing some type of ag-based club that took the FFA model past high school. 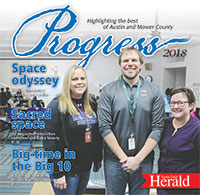 Progress 2018: This story, and much more, can be found in our annual Progress edition, on shelves now.

It took on a life of its own, and soon, it began to come together, she said. The club officially began to organize in September 2017.

“And I think it helps to bring more focus on a career path,” said Codie Wolfe, the club treasurer.

Wolfe is a good example of the collaborative nature of the new club. A high school junior, he is vice president of the Austin High School FFA, and treasurer for the Riverland  club.

In addition to being involved in judging teams, the club has an intentional focus of working in the community on projects that benefit the agricultural population – its Feed a Farmer during the harvest season is good example of that – but also the community as a whole.

The Riverland FFA comes together for a meeting at Riverland Community College.

“We work to support the food pantry, collect for Christmas,” said Bailey Schwarz, the club’s vice president. The club worked with the high school FFA to ring bells for the Austin Salvation Army; it was involved in the annual Corn Drive. The group also solicited funds for United Way.

“They are always doing a project,” praised Schiltz. “They are busy, involved students.”

The officer group represents a good cross section of interest.  Schechinger, Wolfe and club historian William Okweari  are from Austin, and Schwarz is from Vernon Center. Wedin is from Alden; Alex Hagen, the club reporter, is from Albert Lea.

Not all members in the group are geared toward an ag career. Some are headed to nursing careers; others, law enforcement, or business, in addition to agriculture.

“I did the fair since I was little, with 4-H and stuff” said Schechinger, who always enjoyed the opportunities provided in that organization and FFA. Schwarz agreed, adding that growing up on a farm is a special environment.

“It just goes to show you that our kids enjoy being involved in ag – we’re not exclusive,” said Schiltz. “We all play a role in ag in some fashion; the food we eat, products we make. These members will be leaders in their community at some point.” 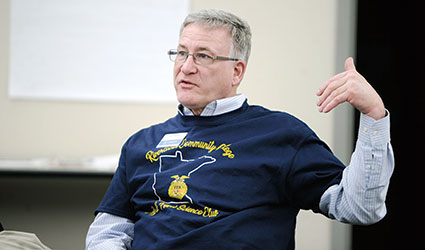 Riverland instructor Dan Hoffman is an adviser for the Riverland FFA.

Schechinger said the club will also provide support when Riverland hosts its Ag Summit this month.

Schiltz added these kinds of opportunities help Riverland “offer the best in our class food science curriculum to high school and college kids; and, by providing opportunities to learn outside of the classroom with projects, we provide that extra experience we cannot replicate in the classroom.

Schechinger said club formation continues, and the first year is a learning year.

“What we’re doing this year may be done differently next year,” she added.

“We’re working out kinks as we go along,” agreed Wolfe.

One thing is abiding, however: this group is committed to service. They have been discussing packaging meals for Kids Against Hunger, too.

“We have put a lot of work into this,” said Schwarz. “And we are getting a lot out of it, too.”