Tailgate at the Hormel Historic Home on Saturday 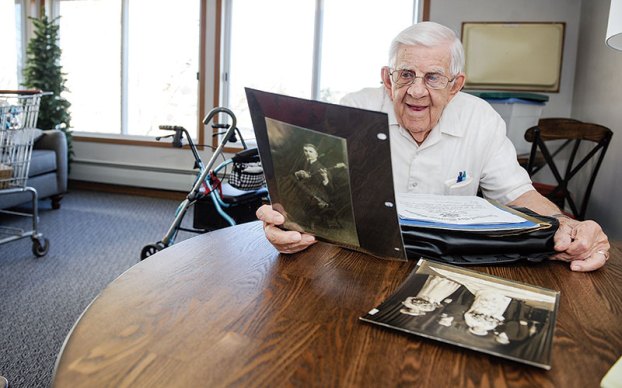 John “Bud” Minerich lived a lifetime before he heard his father’s music played for the first time.

Bud, who was 93, died Monday, just a few weeks after he was able to listen to the Minnesota Mandolin Orchestra play his father’s composition, “Go Forward, Marching.”

Bud found his father’s music among family belongings. His father, also named John, died young, when Bud was only 14 years-old. But Bud was old enough to know his father was a member of bands playing Croatian music, but had no idea how he came to write music. His father was a Croatian immigrant who worked in coal mines in Pennsylvania and later, in Ohio factories. Yet, Bud found that his father’s music was written and arranged for six instruments.

“That is something I have no knowledge of,” Bud said during a Herald interview at the end of November. “I know he taught other people how to play; but where he learned to play, and how he learned to write music, I just don’t know.”

He was able to hear his father’s music when Bud’s son, Phil, arranged to have it played during the Croatian Cultural Society of Minnesota’s Christmas party on Dec. 2.

“It was wonderful,” Bud said after the event. “Really, really great. It was far more than I ever expected.”

The performance also turned out to be something of a Christmas gift to Bud Minerich’s surviving brother and sisters. The performance was recorded and they, too, were also able to enjoy their father’s music.

Bud developed pneumonia last week. He improved and doctors were ready to release him from the hospital when he suddenly suffered a massive heart attack, Phil said.

While a shock, Phil said the family was comforted by the fact his father “passed very peacefully; he was never in any pain.”

The music was John Minerich’s legacy — but Bud has left one, too.

Phil said his father seemed to be like his grandfather, whose “nickname was Smiley,” adding those who knew Bud always commented on his sunny nature.

“My brother said my dad was always the jokester, and that was true,” Phil said, adding he often heard from those at The Cedars of Austin, where Bud lived, “about how my dad always made them laugh, and brightened their day.”

“He always brought along a smile,” Phil said.

Phil said his dad accepted whatever journey he was on, and it was appropriate his grandfather’s composition was so aptly named.

“‘Go Forward, Marching,’” Phil mused. “Keep going forward — that was like my dad. He would say we’re on a path and it is what it is. Whatever happens, you just keep moving on.”

Funeral services for Bud Minerich will be Saturday at Worlein Funeral Home Chapel.