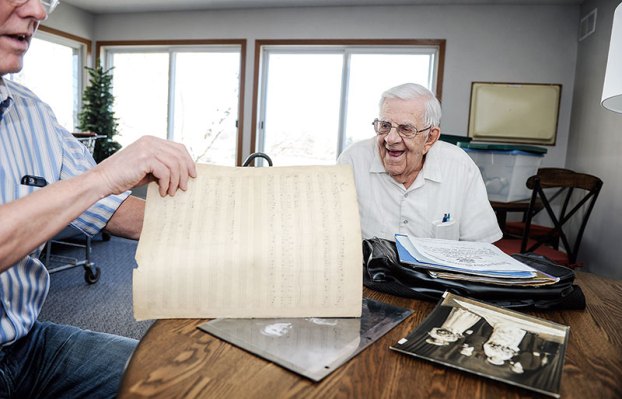 John “Bud” Minerich breaks out into a smile as his son Phil pulls out music written by Bud’s father John Minerich. He will hear the music for the first time on Saturday. Eric Johnson/photodesk@austindailyherald.com

A father’s legacy; Son arranges for his dad a special first-time performance of grandfather’s original music

John “Bud” Minerich is 93 years old and never heard the music his father had written.

A resident of The Cedars of Austin, Minerich looks over a music manuscript that his father, also named John, authored at least 80 years ago. The piece, written and arranged for six instruments, was uncovered among stored family belongings. 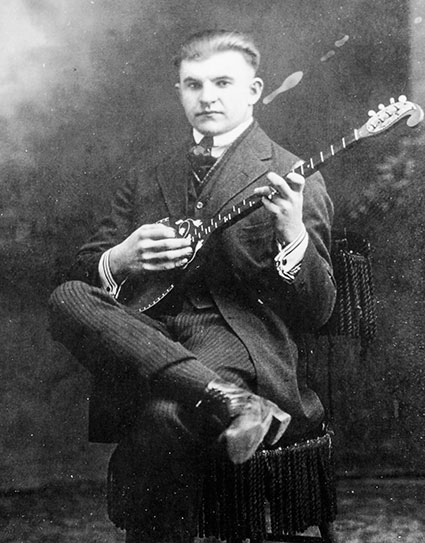 “That is something I have no knowledge of,” Bud said. “I know he taught other people how to play; but where he learned to play, and how he learned to write music, I just don’t know.”

Questions about how the music sounds, however, will be answered on Saturday, during a Christmas party at the Croatian Cultural Society of Minnesota. John Minerich’s music will be played, with Bud and 14 members of his family in attendance.

It was clear that Bud was excited to hear his father’s music. While the piece of music represents a family legacy whose genesis he doesn’t fully understand, he also considers the music a tribute to a man who everyone seemed to like, he said.

His father was a Croatian immigrant who came to the U.S. with his parents, George and Antonia, at the turn of the last century, when he was only a few years old. 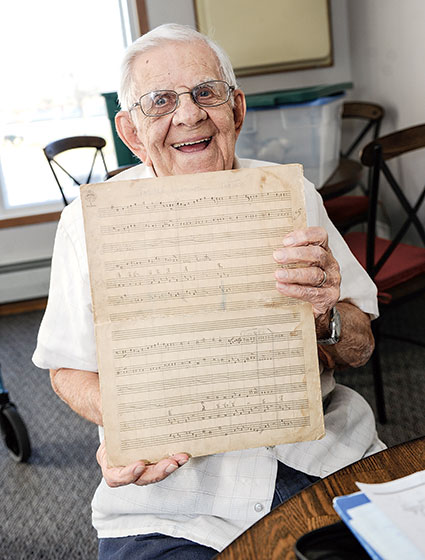 John “Bud” Minerich holds the original sheet music written by his father, John Minerich, music he will hear for the first time on Saturday. Photos by Eric Johnson/photodesk@austindailyherald.com

Later, his father worked in the Pennsylvania coal mines. It is hard to reconcile the life of a mine worker with a man who could create music, but those types of jobs were common among new immigrant populations, Bud said. Later, the family moved to Cleveland, Ohio, where his dad worked as a factory foreman.

But his father’s real passion was music and the Croatian band in which he played. Bud can recall performances in the family’s Cleveland neighborhood.

“We didn’t have TV back then; radio wasn’t always the best. When a live band played, everyone came, everyone would dance,” he said.

And, everyone seemed to like the musician who could easily laugh and joke with friends. You could guess that Bud — who, while talking to you can break into song or offer up a bit of patter — was a lot like him.

There is an elegant photograph of the elder Minerich, holding a tambura, a long-necked, stringed folk instrument that is plucked on doubled steel strings.

The music suddenly stopped, when his father died unexpectedly at the age of 39. 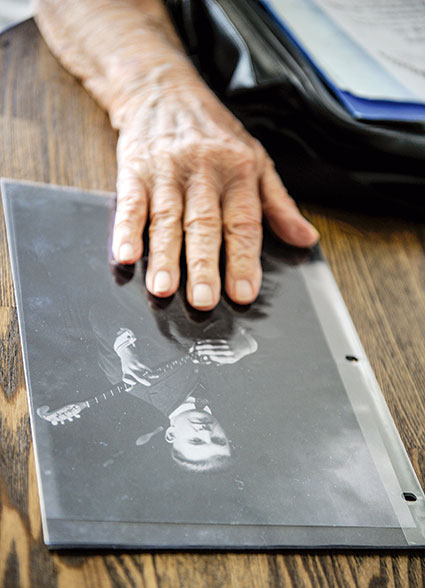 John “Bud” Minerich rests a hand on an old photograph of his father, John Minerich. The elder John wrote a six-part song that Bud will hear for the first time on Saturday.

Bud said he wished he had known his father better, to ask about his musical education, but he was only 14 years old when his father died. His mother, Anna, later remarried. His uncle, Wayne Tobias, married to his paternal aunt, became a surrogate father who kept him on the straight and narrow. Bud went on to serve in Europe during World War II and then worked for the postal service in Ohio. He later came to Austin to be nearer to his son, Phil, who retired from Hormel Foods Corp., where he served as vice president of research and development.

Phil arranged the performance so that his dad would be able to hear the music before he died.

Phil contacted the Croatian society, and found an immediate positive response. The society’s president, Andrea Neumann “loved the story and just ran with it,” he said. A Twin Cities musician will play the music, whose song title is literally, “Go Forward, Marching.”

Phil said the decision to arrange the performance was a natural.

“Whenever my dad sees it (the music), his face changes and it brightens; it is one of the few things he has of his father’s,” Phil said.

Bud said it was a fine honor for a man who “was very personable, very likable — they used to call him ‘Smiley.’