A day for Christmas 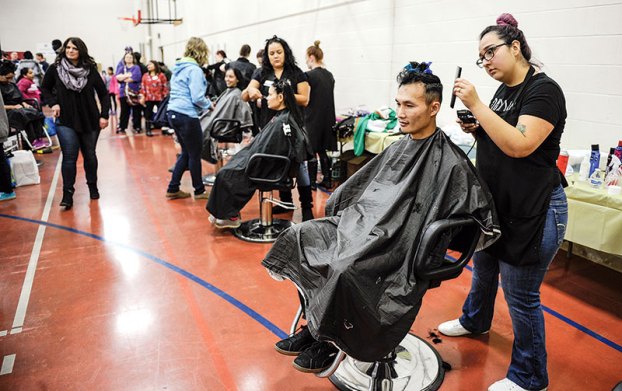 Andrea Ramirez-Hernandez was one of several Riverland cosmotology students on hand to give free haircuts Saturday at the Community Connect event. Photos by Eric Johnson/photodesk@austindailyherald.com

The Austin Poverty Task Force had worked for months to spearhead and prepare for the first-ever Community Connect event in Austin on Saturday, coordinating over 40 agencies, churches and non-profits, as well as the 80 volunteers who offered help.

Their goal? Provide information, resources and services to the underprivileged, hungry and homeless.

The only question they had, however, was “Will they come?”

They needn’t have worried.

Over 500 had streamed through the doors of Hastings Gym at Austin High School in the first hour of the event, with more arriving — elderly, new immigrants, and those who just need a leg up — in what seemed like a growing throng.

Many of the volunteers, task force members and service providers could not help but look stunned.

“We are so pleased,” enthused task force member Bonnie Rietz. “This is so exciting. We had no idea how many might come.”

Rietz praised the agencies and volunteers, who she said universally offered help.

In fact, there were so many volunteers offering help that some had to be turned away, she said, just because organizers could not think of a place to put them.

“Where do I go? asked one woman, nervously looking around at the crowds of people. “I need a flu shot .. and groceries.” A volunteer quickly took her hand and began to guide her through the people.

Rachel Babbitt of Minneapolis was one of the volunteers from the Episcopal Church of Minnesota. She is a missioner for community engagement for the state church, and was lending a hand at the table with Christ Church of Austin, that gave away personal hygiene items. The state church gave $3,000 to the effort to buy the items and Babbitt said she wanted to come to Austin to see what Community Connect was all about.

What she found, she said, was “an absolute joy.” 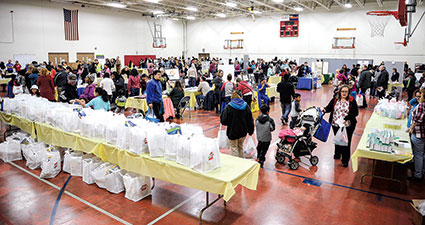 She is a social worker who has worked with the homeless for 10 years in Minneapolis. Babbitt said she couldn’t quite take in everything the community had accomplished in its first-ever event.

“It’s just wonderful; it is so great. To see so many of these agencies, who care about their community, come out,” she said, shaking her head. “It’s put Austin on our map, that’s for sure. Just amazing. I can’t tell you how happy I was to see someone giving haircuts. You don’t know how important that is to some who just cannot afford them.”

She added one woman told her how happy she was for the hygiene products.

“She said she had been washing her clothes with dish soap, because that was all she could afford,” Babbitt said.

“I’m happy, don’t me wrong,” he added with a laugh. “But I had no idea it would be like this. The task force did such a tremendous job, and getting the word out — all the agencies and services, the volunteers. You know, you have these services, you want them utilized. What a great way to be effective. I think it’s just terrific.”

People line up for a free lunch from Hy-Vee and Hormel.

Wendy Orozco, the Parent Center coordinator at Riverland Community College, was manning a table for her center’s services. She was happy to be a part, she said, because a lot of students who are parents, who aren’t aware of the help the center can provide — from gas money to help with groceries.

She was just as surprised as others by the wealth of people — and a side benefit, she said, was that she was learning about community services about which even she was unaware.

But the big benefit, of course, was “just having the community come together like this — it’s so important people know about these services.”

“You know, at the end of the day, no one cares about your politics, or where you’re from — here, today, it’s just about community, and how these people want to help their neighbors.”